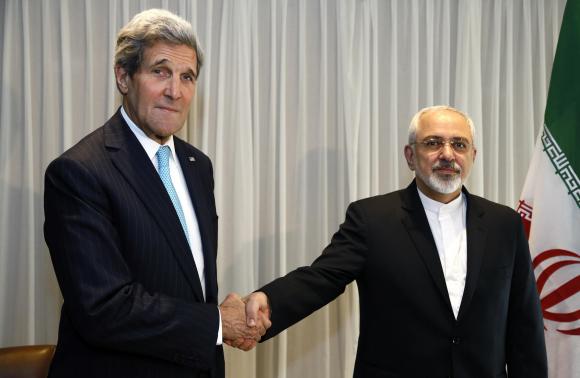 The pic that got the Iranian FM in trouble. U.S. Secretary of State John Kerry with Iranian Foreign Minister Mohammad Javad Zarif before a meeting in Geneva January 14, 2015. CREDIT: REUTERS/RICK WILKING
Share:
Should the talks actually collapse, the alternatives are not appealing. The war option that the United States has kept on the table has few fans, and the world community does not seem willing to impose crippling sanctions. A dangerous period of uncertainty almost certainly would loom.

Which way it goes may depend on which side needs a deal the most. Iran might seem the weaker party, with sanctions crippling its economy. But its authoritarian regime puts up a convincingly brave front, and the Obama Administration, with its legacy on the line, seems at least as determined to conclude a deal.

Israel and Sunni Arab countries like Saudi Arabia fear any scenario where Iran — a Shiite power with a theocratic government involved in conflicts all around the region — is even close to a bomb. Deeply skeptical of Iran’s promises or of the West’s ability to not be hoodwinked, they have no desire to see the deal that appears to be coming.

Here are some disquieting scenarios and questions to consider:

IS THERE A WAR OPTION?

The Obama administration continues to say it has the option of using military force to stop Iran from getting a nuclear weapon, should diplomacy fail. It does not provide details publicly, but military officials acknowledge that the most likely form of U.S. attack would be aerial bombing of Iranian nuclear facilities, some of which are deep underground. There likely are numerous variations on the drawing table.

Depending on the option picked by Obama, the U.S. military could call on a wide range of forces in such an attack, including one or more aircraft carriers, a full array of fighters, bombers and other combat aircraft stationed in or near the Middle East, and special operations forces that might be used to rescue downed pilots or enter Iran on sabotage or other secret missions.

Iran has a substantial air defense system — and Russia earlier this year lifted its self-imposed ban on sales to Iran of the advanced S-300 air defense missile. But even after Iranian deployment of such missiles, Obama says U.S. warplanes could penetrate Iranian airspace.

Still, senior Pentagon leaders have publicly stressed the limitations of bombing, saying it likely would delay Iran’s development of a bomb by no more than three years while strengthening its inclination to covertly go nuclear — like other countries like North Korea and Israel have done. Leon Panetta said while heading the Pentagon in 2011 that U.S. bombing would have “unintended consequences.” A retaliatory Iranian attack on Israel could lead to rapid escalation.

Israel itself has also made threatening noises, but the odds of unilateral military action seem slim: The Jewish state lacks the Americans’ ability to destroy facilities deep underground, is vulnerable due to its small territory, and would risk undercutting the international pressure on Iran for a relatively small return.

COULD THE WORLD RATCHET UP THE SANCTIONS?

It seems the world is not prepared to truly bring Iran to its knees by shutting off the flow of capital and goods. That would involve a tremendously expensive and politically explosive land and sea blockade as well as a militarily enforced no-fly zone across a country 2-1/2 times the size of Texas.

That leaves stiffer sanctions as the only realistic way to pressure Tehran economically. But even that could be a tough sell outside the U.S. The Iranian people who would suffer are largely captive, and some countries, like China, India and Japan, still depend on diminished but still significant exports of Iranian oil.

Iran is also a vast market that companies big and small are eager to tap. The longer sanctions stay in place, the greater the incentive for firms to find ways around them — potentially lessening the impact of any ratcheting up.

The U.S. has had sanctions against Iran in place ever since the Iranian Revolution in 1979 and has tightened them several times in the years to include Tehran’s crucial oil and banking sectors. There would be little to stop politicians in Washington from imposing even tougher measures on Tehran should talks break down and hopes for a deal fall through.

But there may be much less appetite for ramping up the sanctions imposed by the United Nations and the European Union in recent years. As it is, sanctions discipline is already loosening as companies world-wide anticipate returning to the lucrative and underdeveloped Iranian market. Britain’s ambassador to Washington, Peter Westmacott, said last month that “we are probably not far away from the high-water mark” of sanctions against Iran and said “sanctions erosion” would likely follow any collapse of talks.

COULD TALKS BE REPLACED BY A DIFFERENT PROCESS?

After the initial recriminations, both sides are likely to look for ways to salvage the progress made over the past two years in reducing tensions and lowering the chance of a new Mideast war over Iran’s nuclear program.

Iran says it will continue to honor the Non-Proliferation Treaty and its obligations with the UN’s nuclear agency — meaning limited monitoring of its declared nuclear activities. But there will be great suspicion and Israel and others may ratchet up the covert war on the Iranian program; mysterious explosions, deaths and cyber-sabotage can be expected.

Iran may be ready to resume talks if alternatives arise to physical inspection of the non-nuclear sites. One possibility is advanced measuring instruments based on samples from surrounding areas, or samples taken by a mutually trusted Iranian expert while IAEA inspectors await just outside the sites. They may propose interviewing nuclear scientists only through an intermediary or written questions and answers. But the U.S. administration may find it politically difficult to agree to a new set of negotiations — with terms on nuclear transparency dictated by the Iranians — that are much weaker than it had sought.

MIGHT THE IRANIANS MOVE QUICKLY TO DEVELOP A BOMB?

They’re unlikely to go all the way, but could push to reach “threshold” status. Iranian officials insist they do not intend to build a nuclear weapon, and there is a “fatwa,” an Islamic ruling, against the very idea by the country’s top leader, Ayatollah Ali Khamenei. Yet Tehran’s bomb-making ability has grown, and with it the global agitation.

With no talks constraining Iran, it is likely to resume enriching uranium, which Tehran froze early last year under the preliminary deal that led to the present negotiation. Iran says that program is only for peaceful purposes, but enriched uranium can also form the fissile core of a nuclear warhead. If Iran opts to return to enriching at levels just a technical step away from weapons-grade, it could have enough fissile material for one bomb within months. This is the “breakout point” the deal is trying to extend to at least a year.

Iran is years away from the technical expertise needed not only to develop a working warhead but to be able to mount it on a powerful enough missile. But that — and the notion that Iran will stop at “threshold” level — is cold comfort to those who fear Iran.

WHAT WOULD HAPPEN THEN?

The development would come when tensions between the rival Sunni and Shiite sects of Islam are at a historic high, with the sectarian divide fomenting wars in Iraq, Syria, Yemen, and elsewhere while threatening the stability of Lebanon and Bahrain and other countries in the region. Iran is Persian, not Arab — but it is emerging as the top Shiite power in the Middle East. Its hand is in many of the conflicts — whether overtly as in its support for the Hezbollah militia in Lebanon and the Bashar Assad government in Syria, or more opaquely as in Yemen.

Thus, if Iran does become a threshold nuclear weapons state, a domino effect seems likely. Sunni Saudi Arabia — with the oil wealth to buy much of the nuclear prowess that Iran has labored to produce — has hinted it would feel compelled to acquire the same status. Egypt, could also follow suit. Israeli officials have said they believe Iran is aware that reaching the breakout point could have “serious consequences.”