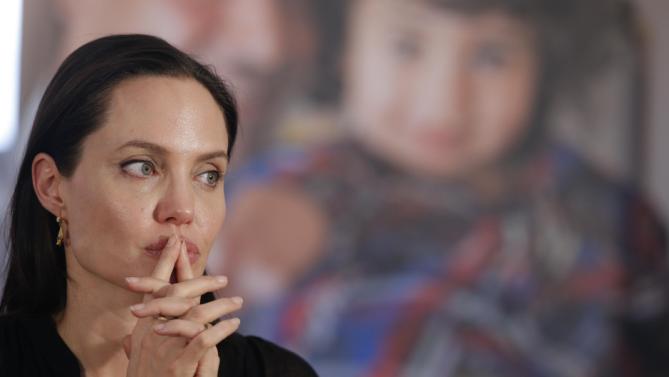 U.S. actress Angelina Jolie, Special Envoy of the United Nations High Commissioner for Refugees, listens to a question during a news conference following a visit to the Midyat refugee camp in Mardin, southeastern Turkey, near the Syrian border, Saturday, June 20, 2015. Marking World Refugee Day Jolie visited the camp which is sheltering those who have fled the 4-year conflict in neighbouring Syria. The UN refugee agency has said the number of Syrian refugees seeking its help now tops two-million – and could be far higher. Turkey is the world’s biggest refugee host with 1.59 million refugees, according to the most recent U.N. figures. (AP Photo/Emrah Gurel)
Share:

Hollywood actress and director Angelina Jolie on Saturday described a spiralling global refugee crisis as an “explosion of human suffering” whose causes the international community refuses to confront.

Jolie, who serves as a United Nations special envoy for refugees, was speaking at a news conference in southeastern Turkey, home to Syrians and Iraqis displaced by war, on World Refugee Day.

The U.N. refugee agency UNHCR said in a report last week that there were now more refugees than at any other time in history, with 59.5 million people displaced from their homes worldwide.

“There is an explosion of human suffering and displacement on a level that has never been seen before,” Jolie said, warning that Syrians and Iraqis were running out of safe havens as neighboring states reached the limit of their capacity.

“It is hard to point to a single instance where, as an international community, we are decisively addressing the root causes of refugee flows,” she said.

Jolie and U.N. High Commissioner for Refugees Antonio Guterres met Turkish President Tayyip Erdogan in the city of Midyat, some 50 km (30 miles) from the Syrian border. She also attended a Ramadan fast-breaking dinner at a nearby camp and visited refugees.

This was Jolie’s third visit to Turkey since 2011, when the conflict in Syria began. The war has displaced more than 3 million refugees, or almost a fifth of the pre-war population.

Turkey shelters 1.8 million Syrian refugees, as well as thousands of Yazidis, whose ancient religion draws on Zoroastrianism, Christianity and Islam, who fled attacks by Islamic State in Iraq last August.

The long-running wars in neighbouring Iraq and Syria mean that Turkey has overtaken Pakistan to become the world’s leading host of refugees, and has spent $6 billion on assisting Syrians alone, UNHCR said.