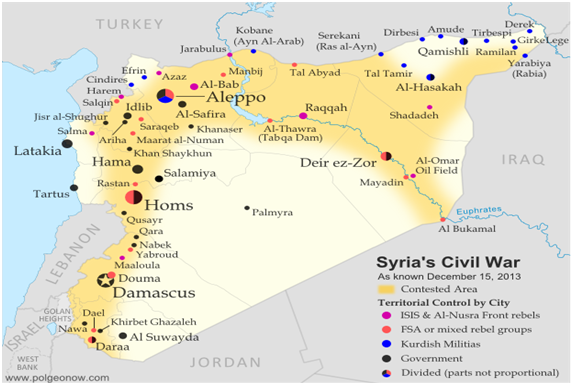 For more than a year, the Syrian town of Tal Abyad on the Turkish border provided a lifeline for the Islamic State group, allowing it to ferry foreign fighters to its self-proclaimed capital of Raqqa and sell oil on the black market.

The loss of the town to the Kurds on Tuesday is a huge setback directly affecting the extremist group’s operational structure and its ability to wage war, making it more difficult to attract volunteers and potentially turning the tide against the militants in Syria and Iraq.

It marked a significant reversal of fortunes for the group that only last month generated alarm through its lightning capture of the provincial capital of Ramadi in Iraq’s Anbar province and the historic town of Palmyra in central Syria.

“It shows that the Islamic State group is weaker than it seems despite their earlier victories,” said Wladimir van Wilgenburg, a political analyst who writes for The Jamestown Foundation, a U.S.-based research center.

Analysts said the fall of Tal Abyad is potentially the most damaging loss for the Islamic State group — known by the acronyms ISIS or ISIL in English and Daesh in Arabic — since it declared its self-styled caliphate stretching across northern Syria and a third of Iraq a year ago.

While losing the town of Kobani to the Kurdish fighters of the People’s Protection Units, or YPG, in January was a symbolic blow to IS, the defeat in Tal Abyad presents a real setback that may lead to a serious degrading of the group’s operations.

Many had predicted a long, drawn-out war with the YPG before the militants would relinquish their hold on Tal Abyad — if at all. Only 50 miles (80 kilometers) north of Raqqa, the town was a major commercial avenue for the group, a smuggling hub for everything from foreign fighters to food and other supplies.

It took less than a month of fighting in the province and only two days for Tal Abyad to fall, with the militants melting away. Some fled to Raqqa, while others went over the border to Turkey, blending in with a flood of refugees.

Aided by U.S. air cover, Kurdish units marching west from Kobani and others moving east from the Kurdish town of Ras al-Ayn linked up, encircling Tal Abyad from three sides.

With that, the Kurds connected two of their self-administered cantons along the border with Turkey, putting even more pressure on Raqqa.

“What happened in Tal Abyad attests to the beginning of a large-scale decline process for IS,” said Hilal Khashan, a political science professor at the American University of Beirut.

While IS could still bring forces across the border in Syria’s Aleppo province where it holds territory, it would be a roundabout route that could expose the extremists to other fighting amid the long Syrian civil war against President Bashar Assad.

“The American policy in Syria and Iraq is to encircle IS and choke them off. When they can no longer sell oil and get reinforcements, they will eventually hit them at intervals,” Khashan said.

The White House indicated the U.S. wasn’t changing its policy after the Kurdish victory and said the ground forces combined with air power are working.

“It is an indication that when our coalition can back capable, effective local fighters on the ground, that we can make important progress against ISIL,” White House press secretary Josh Earnest said.

Activists in Raqqa reported that militants there were on alert Tuesday, preparing for military operations north of the city. A Raqqa-based anti-IS activist group called Raqqa is Being Slaughtered Silently said the militants were seen digging trenches, building shelters and opening a new road.

In Tal Abyad, senior Kurdish commander Haqi Kobane told The Associated Press that Kurdish units along with their allies from the Free Syrian Army were starting to clean up booby traps and mines planted by the extremists so residents can return.

The Kurdish advance caused the displacement of about 23,000 people who fled the fighting to Turkey in the past two weeks, according to the UNHCR.

There were accusations by Syrian rebel groups and some Arab residents of Tal Abyad that the Kurds were deliberately displacing ethnic Arabs and Turkmen to change the demography of the area. Others have alleged that Kurdish forces burned crops and homes in their advances — accusations denied by the YPG.

An AP team on the Turkish side of the Akcakale border crossing said a large black and white Islamic State group flag was taken down Tuesday from a pole in Tal Abyad and replaced with a yellow triangular YPG flag.

The border was calm, in sharp contrast to previous days when thousands of Syrians poured into the frontier crossing, some punching a hole in the fence to enter Turkey.

Even with Tal Abyad’s loss, the Islamic State group still holds roughly about a third of Iraq and Syria, including Iraq’s second-largest city, Mosul.

“It does not mean they will be defeated in a matter of months, but it does mean that Western airstrikes combined with motivated armed militia groups could beat the IS,” said van Wilgenburg, adding that there is still no good strategy to retake the two main IS strongholds of Mosul and Raqqa.

Still, he said, if the United States, the Kurds and Turkey could agree on training and equipping FSA rebels and using the Kurdish territories as safe havens to attack the Islamic state in Raqqa, “it could turn the tide” in Syria.

With most of Syria now controlled by either Islamic State militants or forces loyal to Assad, the U.S. has found a reliable partner in the YPG, a group of moderate, mostly secular Kurdish militiamen driven by revolutionary fervor and the desire for self-rule. Most of the U.S.-led airstrikes in Syria have focused on assisting the Kurds.

On Tuesday, the coalition carried out five airstrikes near Tal Abyad, three near Kobani and one near Raqqa.

The successes of the Kurds and the airstrikes “are exposing Daesh military capabilities and terrorists for subsequent removal from the battlefield,” said Col. Wayne Marotto, chief of public affairs for the coalition.

Since the beginning of 2015, they have wrested back more than 500 mostly Kurdish and Christian towns in northeastern Syria, as well as strategic mountains seized by the Islamic State group. They have recently pushed into Raqqa province, an IS stronghold where Tal Abyad is located.

Kurds say they are preparing for an eventual offensive to recapture the city of Raqqa, but senior Kurdish commander Haqi Kobane said that would take time and need more unity among rebels. For now, they take delight in having deprived IS of a lifeline.

“Tal Abyad was for Daesh a lung through which it breathed and connected to the outside world,” he told AP by telephone from northern Syria.

“Its loss marks the beginning of Daesh’s defeat in Syria,” he said.