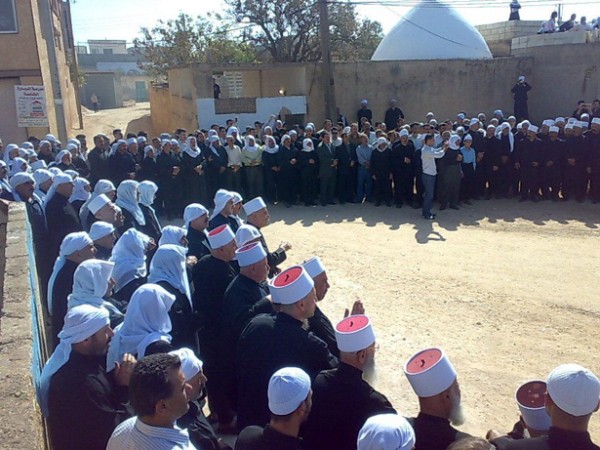 The Druze community met to mourn the death of the members of their community in the Qalb Lawzeh Massacre
Share:

Militants linked to al-Qaeda have shot dead at least 20 members of Syria’s minority Druze community during a standoff at a village in a northwestern province, according to monitoring and opposition groups.

The incident, which the groups said happened Wednesday, highlights the threat to Syria’s many religious minorities from the extremist factions such as al-Qaeda’s Syria affiliate, known as Jabhat al-Nusra, that are seizing significant territory from President Bashar al-Assad.

Meanwhile, a coalition of more moderate rebel groups known as the Southern Front launched a major assault Thursday on a military airfield in the south. The attack on the Thaala air base comes two days after the coalition overran a nearby army base defended by forces loyal to the Assad government, which has lost significant territory recently to the Southern Front as well as to extremists like Jabhat al-Nusra in the northwest and the Islamic State in the east.

A spokesman claimed that Southern Front fighters had taken control of the air base, located in the southern Sweida province. “We have liberated the Thaala military airport in Sweida,” said Issam al-Reis. He noted that government aircraft used the facility for especially devastating barrel-bomb attacks on civilian areas.

Also Thursday, there were unconfirmed reports that rebels downed a regime warplane in southern Syria. Photographs posted on Twitter show what appears to be a Russian-made jet fighter on fire as it falls from the sky, although the authenticity of the images could not be verified. The Southern Front claimed on Twitter that it had shot down the plane over the eastern Daraa province, near Sweida and the Jordan border.

The Syrian military said one of its aircraft had crashed in the area.

The Sweida province, which borders U.S. ally Jordan, is home to a large community of Syria’s Druze, who have sided with the Assad regime during the four-year-old civil war and are increasingly alarmed by the recent rebel advances. Extremist Sunnis linked to al-Qaeda and the Islamic State have threatened Sweida and view the Druze, a 10th-Century offshoot of Shiite Islam who also live in Lebanon and Israel, as apostates.

In the Druze village of Qalb Lawzeh in Syria’s northwestern Idlib province, Jabhat al-Nusra militants gunned down “dozens” of residents on Wednesday, according to the Syrian Observatory for Human Rights. The al-Qaeda wing, also known as Nusra, seized the village last year.

The Britain-based Observatory, which relies on activists in Syria to monitor the civil war, said the killings happened after a Nusra fighter of Tunisian origin tried to confiscate the home of a village resident. Dozens of residents protested the move, prompting the Nusra militants to open fire. Among those killed was a teenage boy, the Observatory’s head, Rami Abdulrahman, a pseudonym, said by telephone.

The Western-backed Syrian National Coalition, an opposition group, put the number of those killed by Nusra in the “dozens.”

Mohammad al-Omar, an anti-government activist in Idlib, said some residents blamed the incident on anger at attempts by Nusra to impose a religious tax on groups that are not considered to be Muslim. Anger has grown over such attempts, he said, describing the tax as “a way for Nusra to raise money.”

With backing from Saudi Arabia, Turkey and Qatar, a coalition of largely Islamist rebels that includes Nusra has seized control over nearly all of Idlib.

Identity of the Druze that were massacred by Nusra

The actual number of Druze people that were massacred exceeds 40 according to reliable sources in Qalb Lawzeh . The sources identified 27 of the massacred people