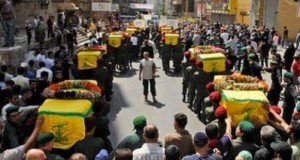 Funeral of Hezbollah fighters that were killed in Qalamoun on June 10, 2015 according to The Syrian Observatory for Human Rights
Share:

The head of Lebanon’s Hezbollah movement announced Wednesday that the powerful Shiite militia had begun to fight the Islamic State jihadist group along the rugged Syrian-Lebanese border.

“The battle with Daesh in Qalamun has begun, in the eastern (mountain) chain and on the Syrian-Lebanese border,” Hassan Nasrallah said in a televised speech, referring to IS by its Arabic acronym.

He said fierce clashes had left dozens of IS fighters dead, and that Hezbollah had lost men, without specifying a number.

“They (IS) began the fighting, but we will continue the battle,” Nasrallah said.

Hezbollah has intervened militarily in Syria on behalf of President Bashar al-Assad, saying it is protecting Lebanon from the threat of jihadists in the neighbouring country.

IS has made a series of major gains in Syria and Iraq in recent months, one year after it declared an Islamic “caliphate” over areas under its control.

Nasrallah vowed Wednesday to see the fight with the jihadists through.

“I assure you that defeat will come to these men. It’s a matter of time, and we are not in a hurry,” he said.

“These are fighters’ corpses and the spoils that the resistance (Hezbollah) has seized during clashes outside the town of Ras Baalbek,” a town near Lebanon’s border with Syria, the channel said.

The joint Hezbollah-Syrian army offensive to clear the border area of rebel militias began about a month ago, and Nasrallah has included updates on the assault in numerous televised speeches since then.