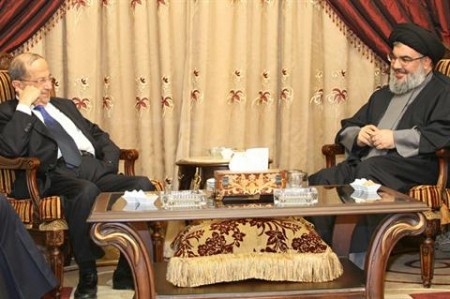 A Hezbollah official was quoted as saying on  Monday that Lebanon has two choices: Either to accept Free Patriotic Movement leader Michel Aoun as president, or deal with an indefinite presidential vacuum .

Naim Qassem Hezbollah’s  deputy chief who is usually referred to as number 2  said in  Baalbeck Valley that “either FPM chief Michel Aoun is elected as president, or the issue will be delayed indefinitely.”

Addressing the March 14 coalition, he said that it was “better to choose Aoun” because he is ready to make commitments, broker agreements and ensure that the Taif agreement, which ended Lebanon’s civil war, is fully implemented.

He will also guarantee that the country transitions into a more positive phase characterized by domestic cooperation, Qassem added.

“If you choose Aoun, then Lebanon will have a president, and if you don’t choose him, then that means you don’t want a solution,” he concluded.

The Lebanese parliament failed last week  and for the 24th   time in a row to elect a president to replace Michel Suleiman whose term ended on May 25.

Lebanese Forces chief Samir Geagea  who was the first to announce his presidential candidacy blamed Hezbollah for the vacuum at the country’s top Christian post, saying the party has been insisting on backing a single candidate, in reference to Aoun, and not making compromises.

“Hezbollah’s top priority is the region’s crisis and not Lebanon,” he said.

“The failure of the Christians to agree on a candidate does not provide an excuse for Hezbollah  to continue its boycott of sessions,” said Geagea.