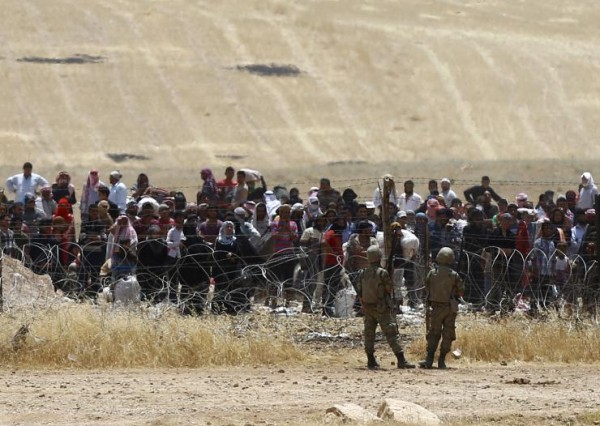 Turkish soldiers patrol the Turkey-Syria border as Syrian refugees wait to be admitted. Nearly four million residents are displaced after four years of civil war in Syria. Many have fled to nearby countries where the capacity of international aid groups and governments to support them is maxed out. Reuters/Osman Orsal
Share:
Nearly 4 million Syrian refugees have fled violence in the country over four years of a civil war that has killed at least 220,000 people. If the number of refugees continues to rise as expected, the Syrian conflict could result in the largest mass exodus of citizens from any country in the world since the 1994 Rwandan genocide, Al Jazeera reports.

An official tally by the United Nations High Commissioner for Refugees states that there are currently 3.9 million registered Syrian refugees, which is up from about 2.7 million a year ago. Another 7.6 million Syrians remain in the country but are displaced from their homes and 5.5. million Syrian children have been affected by the battles, according to USAID. Many have stopped attending school.

The vast majority of Syrian refugees are now in Turkey and Lebanon, though some have also made their way to Jordan, Iraq and North Africa. International groups have struggled to get aid to many who need it, particularly the 1.2 million who have fled to Lebanon where the government has run out of assistance and discouraged new refugees from entering the country.

The United Nations estimates that $4.5 billion is needed this year to provide an adequate response to the crisis but only 20 percent, or just under $1 billion, has been made available by world leaders. Some refugees have turned to the internet to raise their own funds through crowd sourcing campaigns or social media instead. Since the conflict began, the United States has committed more than $3 billion in aid and is the world’s leading donor to victims.

Syria has been embroiled in a bitter war since 2011. The Islamic State group, also known as ISIS or ISIL, now controls half of the country, Al Jazeera reports. Recently, insurgents from every faction with a stake in the ongoing battle have headed to Aleppo, the nation’s largest city which has remained under the control of the government led by President Bashar Assad. At least 70 civilians were killed near Aleppo recently by bombs dropped by helicopters in a government-led attack to keep rebels at bay, the United Nations has confirmed.