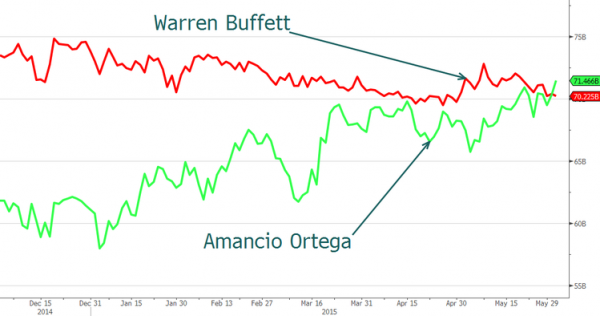 It’s the first time the founder of Inditex SA, the world’s largest clothing retailer, has occupied the No. 2 slot since the Bloomberg Billionaires Index debuted in March 2012.

Ortega’s net worth has increased 17 percent to $71.5 billion this year as Inditex profit rose amid surging sales. The La Coruna, Spain-based company operates more than 6,600 stores under brands that include Zara, Massimo Dutti and Pull&Bear.

“Ortega is an insane operator,” Bridget Weishaar, analyst at Morningstar Investment Services, said in a phone interview from Chicago. He’s been “very strategic with the company’s growth.”
By keeping some production facilities close to the headquarters in Spain and distributing to stores twice a week, Inditex has been able to respond more quickly to shifts in fashion trends than competitors that concentrated production in China to cut costs, Weishaar said.

The retailer also has built large stores in trendy shopping areas in some of the world’s biggest cities, reducing the need for other marketing expenditures, she said.

In January, the company acquired a 4,400 square-meter building in New York’s SoHo neighborhood. The company said it is looking to open as many as 480 outlets this year, including three in New York. It also plans to start online sales in Hong Kong, Macau and Taiwan.

Buffett’s $70.2 billion fortune comes almost entirely from his controlling stake in Berkshire Hathaway Inc., the conglomerate he built over the past five decades. The company has slipped about 5 percent percent this year as two of Buffett’s biggest equity investments — American Express Co. and Coca-Cola Co. — have floundered.

While the billionaire is widely known for his stock-picking skills, he lately has been focusing more on expanding the company’s stable of businesses. Berkshire’s subsidiaries include manufacturers, retailers, electric utilities, auto insurer Geico and railroad operator BNSF.

In March, he completed a $4.1 billion acquisition of one of the largest U.S. auto dealership groups and agreed to help ketchup maker H.J. Heinz finance its proposed merger with Kraft Foods Group Inc. Berkshire will own about a quarter of the combined company.

Microsoft Corp. co-founder Bill Gates remains the world’s richest person, according to the ranking. He has an $85.5 billion fortune.