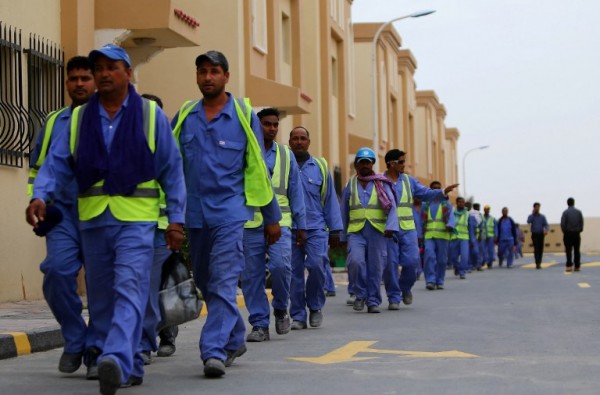 Nepal’s labour minister urged Qatar on Monday to scrap a sponsorship scheme which prevents the free movement of migrant workers, calling it a violation of the rights of thousands of its nationals who are working in the Gulf state.

The kafala sponsorship system is used to monitor the number of foreigners working in Gulf Arab states, which rely heavily on cheap foreign labour mostly from South Asian countries.

The system, which requires migrant workers to seek permission from employers to change jobs, has long been criticised by human rights groups and trade unions who have likened it to a form of modern day slavery.

In many cases employers take workers’ passports to keep them there or extort a large fee before allowing them to leave.

“From the human rights point of view of the workers, I think the kafala system should be abolished … workers should be allowed to return or change their jobs if they want to,” Labour Minister Tek Bahadur Gurung told the Thomson Reuters Foundation.

Gurung denied media reports that Qatar was not permitting Nepali workers to return home to perform the last rites of family members who died in a devastating earthquake in April, but said that, in general, the sponsorship system had to go.

An emailed request for comment on the kafala system sent by the Thomson Reuters Foundation on May 27 to the Qatar embassy in New Delhi remained unanswered, and Qatari officials were not immediately available for comment by phone.

One of the world’s poorest countries, Nepal is heavily reliant on remittances. The money workers send back has nearly doubled in the last two years to $4.34 billion — more than 20 percent of Nepal’s gross domestic product.

More than 3.5 million Nepalis work in construction, factories and domestic work in the Middle East, Korea and Malaysia. Some 400,000 work as labourers in Qatar including in the construction of football stadia for the 2022 FIFA World Cup.

But in recent years, human rights groups have made frequent allegations of abuse stemming from the kafala system.

In 2013, Nepal recalled its ambassador in Doha after the envoy called Qatar an “open jail” for its workers.

Nepal once again voiced its concern with Qatar’s labour minister Abdullah Saleh Mubarak al-Khulaifi during his visit to the Himalayan nation in April.

Gurung said al-Khulaifi promised to ensure better working conditions, safety and insurance to Nepali migrant workers, but if it did not, Nepal would approach FIFA, world soccer’s governing body.

“If it failed to do so, we could approach FIFA to exert pressure,” Gurung said.