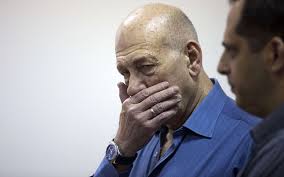 Former Israeli Prime Minister Ehud Olmert was sentenced Monday to eight months in prison for unlawfully accepting money from a U.S. supporter, capping the dramatic downfall of a man who only years earlier led the country and hoped to bring about a historic peace agreement with the Palestinians.

Olmert was convicted in March in a retrial in Jerusalem District Court. The sentencing comes in addition to a six-year prison sentence he received last year in a separate bribery conviction, ensuring the end of the former premier’s political career.

Olmert’s lawyer, Eyal Rozovsky, said Olmert’s legal team was “very disappointed” by the ruling and would appeal to Israel’s Supreme Court. They were granted a 45-day stay, meaning the former Israeli leader will avoid incarceration for now.

Olmert also was given a suspended sentence of an additional eight months and fined $25,000.

A slew of character witnesses had vouched for Olmert, including former British Prime Minister Tony Blair and former Israeli Mossad chief Meir Dagan in written statements read aloud Monday. The verdict stated that it recognized Olmert’s vast contributions to Israeli society and sentenced him to less than the prosecution had demanded. Still, it ruled that “a black flag hovers over his conduct.”

Olmert was forced to resign in early 2009 amid the corruption allegations. His departure cleared the way for hard-liner Benjamin Netanyahu’s election, and subsequent peace efforts have not succeeded.

Olmert, 69, was acquitted in 2012 of a series of charges that included accepting cash-stuffed envelopes from U.S. businessman Morris Talansky when Olmert was mayor of Jerusalem and a Cabinet minister. Olmert was found to have received about $600,000 from Talansky during his term as mayor, and additional amounts in cash during his term as a Cabinet minister, but a court did not find evidence the money had been used for unlawful personal reasons or illegal campaign financing.

Talansky, an Orthodox Jew from New York’s Long Island, had testified the money was spent on expensive cigars, first-class travel and luxury hotels, while insisting he received nothing in return.

The acquittal on the most serious charges at the time was seen as a major victory for Olmert, who denied being corrupt. He was convicted only on a lesser charge of breach of trust for steering job appointments and contracts to clients of a business partner, and it raised hopes for his political comeback.

But Olmert’s former office manager and confidant Shula Zaken later became a state’s witness, offering diary entries and tape recordings of conversations with Olmert about illicitly receiving cash, leading to a retrial. In the recordings, Olmert is heard telling Zaken not to testify in the first trial so she would not incriminate him.

The judges concluded that Olmert gave Zaken part of the money in exchange for her loyalty, and used the money for his own personal use without reporting it according to law. They convicted him on a serious charge of illicitly receiving money, as well as charges of fraud and breach of trust.

In a separate trial in March 2014, Olmert was convicted of bribery over a Jerusalem real estate scandal and was sentenced to six years in prison. He appealed and has been allowed to stay out of prison until a verdict is delivered.

At the time Olmert resigned as prime minister, Israel and the Palestinians had been engaged in more than a year of intense negotiations over the terms of Palestinian independence. The Palestinians seek all of the West Bank and east Jerusalem, in addition to the Gaza Strip, for an independent state. Israel occupied all three areas in the 1967 Mideast war, though it withdrew from Gaza in 2005.

Since leaving office, Olmert has said he presented the Palestinians the most generous Israeli proposal in history, offering roughly 95 percent of the West Bank, along with a land swap covering the remaining 5 percent of territory. In addition, he proposed international administration in east Jerusalem, home to the city’s most sensitive religious sites.

Palestinian officials have said that while progress was made, Olmert’s assessment was overly optimistic.