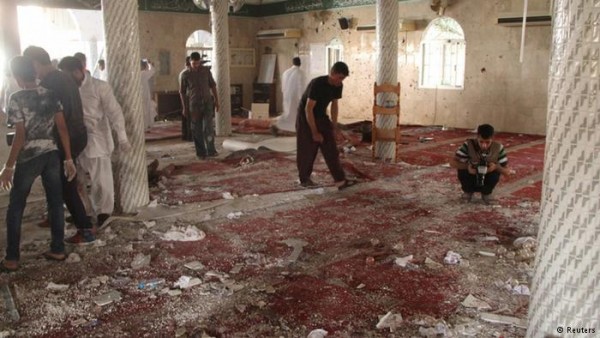 Saudi Arabia’s King Salman promised on Sunday to punish those responsible for the recent suicide attack of the above Shiite mosque in the country’s east – a rare occurrence in the kingdom.
Share:
Saudi Arabia’s King Salman said on Sunday he was heartbroken over a suicide bombing that killed 21 people at a Shi’ite mosque in the kingdom, state news agency SPA reported, a conciliatory statement as sectarian strife intensifies in the region.

Salman said anyone linked to the attack, claimed by the Islamist militant group Islamic State, or who sympathized with it, would be brought to justice.

“We were pained by the enormity of the crime of this terrorist aggression which contradicts Islamic and humanitarian values,” the king said in a message to Crown Prince Mohammed bin Nayef, who is also the interior minister.

A Sunni Muslim militant blew himself up in the al-Qadeeh village mosque in Saudi Arabia’s heavily Shi’ite east during Friday prayers, in one of the worst attacks in the kingdom in years.

The Saudi Interior Ministry said there was evidence of a link between Islamic State’s leader Abu Bakr al-Baghdadi and a militant cell in Saudi Arabia that had included the mosque bomber, identified as Saudi citizen Saleh bin Abdul Rahman Saleh Qashimi.

“This organization starts with Abu Bakr al-Baghdadi and under him the suspect whom we’ve mentioned, and one grade below him their combat and bombing wing … under which is the killings and assassinations wing which undertook the al-Qadeeh incident.”

The bombing in Saudi Arabia has come as tensions between Sunni and Shi’ite Muslims are on the increase in the region. Some clerics in Saudi Arabia, the birthplace of Islam and mainstay of its Sunni denomination, are deeply hostile toward Shi’ites, whom they regard as apostates.

Saudi Arabia is also part of an international coalition carrying out bombing strikes on Islamic State targets in Iraq and Syria, and Islamic State has threatened to launch revenge attacks.

Saudi and Gulf governments fear that sectarian wars in Yemen, Syria and Iraq where they and other Sunni Muslim allies are fighting groups close to Shi’ite archrival Iran will radicalize their citizens.