US presses Israel on talks for Middle East nuclear-free zone 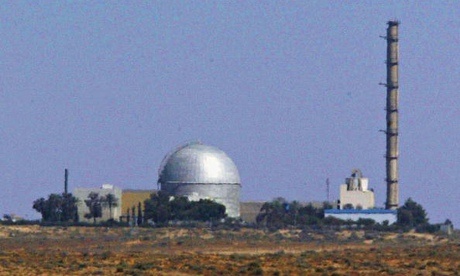 The United States has sent a top official to Israel in an effort to revive talks on a Middle East zone free of nuclear weapons, a central issue of a nuclear treaty review conference that some fear will end Friday without progress on global disarmament.

The State Department confirmed that the assistant secretary of state for international security and nonproliferation was in Israel to discuss the issue. An Israeli Foreign Ministry spokesman declined comment on Thomas Countryman’s visit, saying it was a “very sensitive” matter.

Establishing a zone free of nuclear weapons in one of the world’s most tense regions is a rare point of agreement between the United States and Russia these days. Frustrated by the delay of a conference on the zone that was supposed to take place three years ago, Russia has proposed that U.N.-led talks be held no later than March 2016.

A draft dated Wednesday for one of the review conference’s three main committees would impose an even earlier deadline, saying the U.N. secretary-general should convene talks by Dec. 15 if Israel and its neighbors can’t agree on arrangements by then.

Israel is concerned about talks being held without its agreement on an agenda, said Emily Landau, head of the Arms Control program at the Institute for National Security Studies, an Israeli think tank. If talks single out Israel as the only state that needs to take action, “obviously it’s not something Israel will be able to agree to,” she said.

U.S. Secretary of State John Kerry this month called the proposed Middle East nuclear-free zone an “ambitious goal and fraught with challenges” but worth pursuing. Israel has never publicly declared what is widely considered to be an extensive nuclear weapons program.

The pressure comes as the president of the review conference, Taous Feroukhi of Algeria, on Wednesday pleaded with countries to close the “still wide” gaps on major issues under disarmament and non-proliferation.

“I have nothing substantive to share with you. This is the problem,” she said. “Please, I need your help.” She set a deadline of Thursday afternoon for a draft text that can be shared with countries’ capitals for possible action on Friday.

The review conference for the landmark Nuclear Non-Proliferation Treaty takes place just every five years, and a failure to agree on a way forward would highlight the growing frustration of countries without nuclear weapons to get the nuclear-armed ones to take concrete steps to disarm. The United States and Russia hold more than 90 percent of the estimated 16,000 nuclear weapons in the world today.

Israel is not a party to the treaty but showed up this year as a surprise observer. It blamed its Arab neighbors for the failure of progress toward achieving a Middle East free of nuclear weapons, saying that after five rounds of consultations with some of its Arab neighbors in Switzerland between October 2013 and June 2014 on a possible agenda, the other states discontinued the meetings.

Israel did not say why the talks were discontinued, but noted that the consultations were “the first direct engagement between Israel and its neighbors on this issue in over 20 years.”

Iran, a party to the treaty and engaged in talks with world powers on its own nuclear program, this month spoke on behalf of more than 100 mostly developing countries in calling for Israel to give up its nuclear weapons, calling them a regional threat.