Netanyahu’s new government sworn in. No mention of 2- state solution 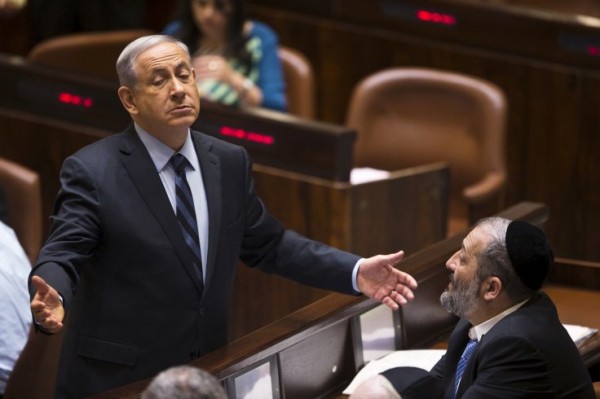 The evening ceremony in the Knesset was postponed by two hours so Netanyahu could divvy up for Likud the remaining ministries, after others were assigned to its four partners. Some Israeli commentators called the manoeuvring “farcical”.

The coalition with conservative, far-right, and ultra-Orthodox Jewish parties controls 61 of parliament’s 120 seats, auguring difficulty for the fourth-term Netanyahu in passing controversial policies or even surviving no-confidence votes.

Blowback abroad is also expected. Prospects for resolving deadlocked US-sponsored peace talks with the Palestinians are dim, Netanyahu is at loggerheads with Washington over its nuclear negotiations with Iran, and Western diplomats recoil at nationalist legislation championed by some in the coalition.

Seconds into his speech unveiling the government, as he pledged that it would “safeguard security, work towards peace,” Netanyahu was interrupted by opposition heckling and guffaws.

But coalition lawmakers managed to get the new government approved by a 61-59 vote, to allow its inauguration by midnight.

Netanyahu has retained four cabinet portfolios for himself, at the cost of leaving key Likud loyalists feeling bereft. That has stirred speculation he is holding the ministries in reserve for Isaac Herzog, head of the centre-left opposition, should they eventually join forces in a “national unity” government.

“I am leaving the door open for broadening the government,” Netanyahu said in his speech. “The country needs this.”

Herzog was combative when he took the lectern, however: “No decent leader would join the ‘Netanyahu circus’ that you put together at the last minute, on the strength of one seat, only to extend your rule,” he said.

Shortly after winning a 17 March election, Netanyahu appeared to be coasting towards a comfortable 67-seat majority. But in a surprise move last week, he was abandoned by long-time ultra-nationalist coalition ally Avigdor Lieberman.

The guidelines of the new government make no mention of a two-state solution to the Israeli-Palestinian conflict, after talks collapsed in April last year. Instead, they pledge in general terms to “advance the diplomatic process and strive for a peace agreement with the Palestinians and all our neighbours”.

US President Barack Obama said on Tuesday he had not given up hope for peacemaking.

Palestinian President Mahmoud Abbas said on Thursday he was willing to revive peace talks but the onus was on Netanyahu to change course and end Israel’s West Bank occupation by 2017.
Reuters