US, Saudi Arabia call for 5-day cease-fire in Yemen to let in aid 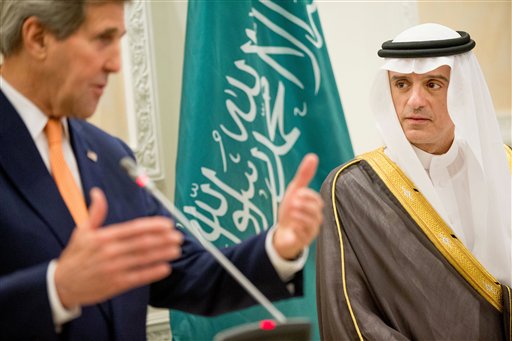 U.S. Secretary of State John Kerry, left, and Saudi Foreign Minister Adel al-Jubeir, right, hold a joint news conference at Riyadh Air Base in Saudi Arabia, Thursday, May 7, 2015. Kerry sought to secure a pause in Yemen’s war after he arrived to Saudi Arabia to meet with the king and other top officials, citing increased shortages of food, fuel and medicine that are adding to a crisis that already has neighboring countries bracing for a mass exodus of refugees. (AP Photo/Andrew Harnik, Pool)
Share:

Saudi Arabia and the United States on Thursday announced a five-day, renewable cease-fire in Yemen’s war to allow aid to reach millions of civilians caught in a humanitarian crisis from the conflict. But the truce is dependent on Iran-backed rebels and their allies also agreeing to stop fighting, they said.

The announcement came as battles raged in several parts of Yemen between forces loyal to the nation’s internationally recognized president and the Shiite rebels and their allies. Military and security officials said the rebel forces Thursday advanced on the suburb of Dar Saad north of the strategic port city of Aden, while fighting intensified in the nearby provinces of Abyan and Taiz.

Addressing a joint news conference with U.S. Secretary of State John Kerry, Saudi Foreign Minister Adel al-Jubeir said the oil-rich kingdom would halt airstrikes in Yemen because it is determined to expand relief assistance to the Yemeni people. Saudi Arabia will provide $274 million in new assistance, he said.

Kerry said the “humanitarian pause” wouldn’t start for several days, enough time for diplomatic efforts to convince the Shiite rebels known as the Houthis and their backers to accept the terms of the deal. He said aid organizations also needed time to coordinate the best strategy for getting food, fuel and medicine into and around the country.

“We strongly urge the Houthis and those who back them … not to miss this major opportunity to address the needs of the Yemeni people and find a peaceful way forward,” Kerry said, speaking in the Saudi capital, Riyadh.

Kerry said he spoke with Iranian Foreign Minister Mohammad Javad Zarif earlier this week. Kerry and al-Jubeir said they would provide an update Friday in Paris, where they will gather with the foreign ministers of other Arab countries. Iran gives the rebels political backing — and Saudi Arabia and the U.S. say it also provides them with weapons, a claim Tehran denies.

The Saudi-led campaign of airstrikes, which began March 26, along with the fighting on the ground has pushed Yemen toward humanitarian disaster, U.N. and other aid officials have warned for weeks. In the past six weeks, more than 1,400 people have been killed and 6,000 wounded, many of them civilians, the U.N. humanitarian coordinator in Yemen, Johannes van der Klaauw, said Thursday.

More than 300,000 others have fled their homes. The turmoil has disrupted crucial imports and internal transportation, causing shortages of fuel, food and medicines.

Yemen was already the Arab world’s poorest nation and has long been plagued by political dysfunction and violence by al-Qaida’s most lethal branch.

Late last year, the Houthis took over the capital, Sanaa, and much of the north, backed by military forces loyal to former President Ali Abdullah Saleh. Earlier this year, they began a march on the south, driving the current president, Abed Rabbo Mansour Hadi, to flee to neighboring Saudi Arabia. That prompted the Saudis and other Gulf Arab states to intervene with the air campaign while backing pro-government forces on the ground.

Several weeks ago, Saudi Arabia said it was dialing back its air campaign, but it quickly revved back up again when the rebels and pro-Saleh forces pressed ahead with their offensive south.

Kerry, who met earlier with Saudi King Salman, expressed hope this time would be different.

“We particularly welcome a new Saudi initiative to try to bring about a peaceful resolution,” Kerry said.

The cease-fire, he explained, would mean “no bombing, no shooting” and no repositioning of forces. But he and al-Jubeir insisted the feasibility of the plan depended on the Houthis and the Iranians agreeing to it and not trying to exploit the lull in fighting.

Kerry met earlier Thursday in Riyadh, the Saudi capital, with Hadi and the Yemeni vice president and foreign minister.

In Tehran, the chief of Iran’s Red Crescent society, Ali Asghar Ahmadi, said a ship was being loaded with 2,500 metric tons of aid, including medicine and food, intended for Yemen.

It was not immediately known whether the Saudi-led coalition would allow the ship to approach Yemen’s shores. Coalition warplanes bombed Sanaa airport earlier this month to prevent an Iranian aircraft said by Tehran to be carrying humanitarian aid from landing there. The Saudis said the plane should have landed in Saudi Arabia to have its cargo checked first.

The cease-fire pledge comes as the Houthis and Saleh forces consolidated their hold over much of Aden, the southern port city that is the main bastion of Hadi supporters. On Wednesday, the rebel forces overwhelmed the downtown district of Tawahi and a presidential palace in the area.

As many as 50 people were killed when rebel fire hit their boat as they tried to flee the downtown area by water, military and security officials in the city said, speaking on condition of anonymity because they were not authorized to speak to the media.

Van der Klaauw, the U.N. official, said he was “gravely concerned” by reports from Aden of scores of people killed and injured in the fighting Wednesday.

“Civilians were reportedly targeted while they were trying to flee to safer areas, having been trapped in Aden with limited or no access to water, food and health care for weeks,” he said.