by yalibnan
1770
Share:
Progressive Socialist Party chief MP Walid Jumblatt said on Tuesday that the Syrian regime took the failure to abolish political confessionalism in Lebanon as an excuse to remain in the country, adding the bombing that targeted MP Marwan Hamadeh was the first warning to ex-PM Rafik Hariri.

“The Taef Accord had called for abolishing the political sectarian system but this has not been achieved,” Jumblat told the Special Tribunal for Lebanon on the second day of his testimony.

“The failure to abolish political confessionalism was an excuse for the Syrians to stay in Lebanon,” he said.

Jumblatt reiterated that he was allied with the Syrian regime, but following the extension of pro-Syrian President Emile Lahoud’s term in 2004, “I said enough.”

“It was time for Lebanon to become an independent state,” he told the STL.

“Hariri and I had the same conviction on the necessity of Syria’s pullout from Lebanon based on the Taef,” he said.

Jumblatt told the Trial Chamber that he was among officials who sought to expand the opposition against Lahoud’s extension and the practices of the security system.

The opposition began to gather stream through meetings held by anti-Syria politicians at the Bristol Hotel in Beirut. “Several such meetings were held at my residence in Beirut,” said the lawmaker.

“There was no difference between the Lebanese and Syrian intelligence apparatuses because they had one leader – Syrian President Bashar Assad and his representative Lahoud,” he added.

Jumblatt said he was not surprised to be accused of being an Israeli agent and a “traitor” by pro-Syria politicians.

The PSP chief described Assad as one of the “tyrants” ruling the Arab world. 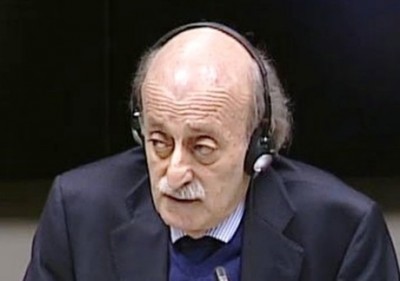 Jumblatt also recounted to the court the circumstances of the bombing that targeted Hamadeh in Beirut in October 2004.

After Hamadeh survived the assassination attempt, a former Syrian military officer, Hekmat al-Shehabi, called him and told him to be careful, said the MP.

Then Syrian Vice President Abdul Halim Khaddam visited Hamadeh and said he had also been the target of an assassination attempt plotted by Rifaat Assad.

“According to my political conclusion, he was indirectly referring to the Syrian regime,” the lawmaker said.

“Hamadeh’s assassination attempt was an interpretation of Assad’s threat to Hariri,” said Jumblatt. “It was the first clear message of … confrontation.”

On his first day of testimony, Jumblatt told the court based in The Hague that Hariri was sad and angry after Assad insisted in August 2004 that the ex-PM support a constitutional amendment to extend the presidency of Lahoud.

Assad threatened Hariri at the meeting they held in Damascus that he will destroy Lebanon if he rejects the extension, said Jumblatt.

“Assad showed hostility towards Rafik Hariri before he was elected president,” he added.

Several politicians who have testified at the STL before Jumblatt made revelations that Hariri had confined to them about Assad’s threat.

Five Hezbollah members have been charged with plotting Hariri’s Feb. 14, 2005 assassination in a massive explosion at the Beirut seafront but have not been arrested. Their trial in absentia began in January 2014 and is ongoing.

Hezbollah denies involvement in the murder and the group’s leader, Sayyed Hassan Nasrallah, has denounced the court as a conspiracy by his archenemies — the U.S. and Israel.