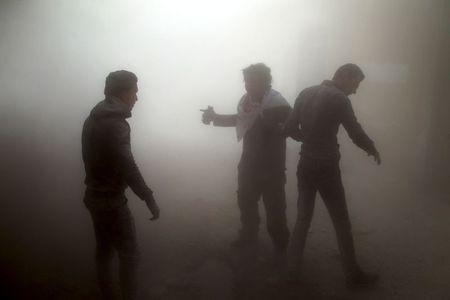 Residents help each other amid dust in a damaged site after what activists said was due to air strikes by forces loyal to Syria’s president Bashar Al-Assad on Jisr al-Shughour town after rebels took control of the area April 25, 2015. REUTERS/Ammar Abdullah
Share:

Syrian jets carried out at least 20 air strikes on the town of Jisr al-Shughour in northwestern Syria on Sunday, a group monitoring the war said, one day after it was seized by Islamist fighters closing in on government-held territory by the coast.

Syrian state television said the military had ambushed some militants close to Jisr al-Shughour, which was captured on Saturday for the first time in the four-year conflict by a hardline Islamist alliance including al-Qaeda.

Syrian television also reported that the insurgents had slaughtered civilians, but the Observatory said only government supporters had been detained and no one killed.

“Terrorist groups committed a horrific massacre of civilians after entering Jisr al-Shughour,” state television quoted a military source as saying. It said at least 30 civilians had been killed in the town close to the Turkish border.

But Observatory said combatants had detained government backers and that there was no confirmation so far they had killed anyone.

“If we knew people were killed by them we would report it,” the Observatory’s founder Rami Abdulrahman said. “No women and children were captured.”

His monitoring group, which says it collects information from all sides of the conflict, said at least 27 people, mainly insurgents, were killed after Syrian jets bombed Jisr al-Shughour overnight. Heavy fighting continued south of the town.

The capture of the town of 50,000 people in Idlib province was the latest setback for government forces in the south and north of Syria. 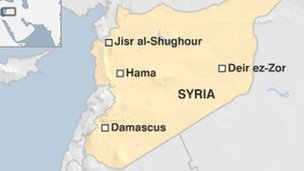 Insurgents have been trying to push the army out of the few remaining government areas in the province, bringing them closer to Latakia, a coastal province of vital importance to President Bashar al-Assad.

State news agency SANA also said the military had carried out night raids around Jisr al-Shughour and inflicted heavy losses on its enemies.

Last month the hardline Sunni Islamist rebels seized Idlib city, the provincial capital, after forming an alliance that includes Nusra, the Ahrar al-Sham movement and Jund al-Aqsa, but not the rival Islamic State group which controls large tracts of Syria and Iraq.

The Islamist alliance calls itself the Army of Fatah, a reference to the conquests that spread Islam across the Middle East from the 7th century.