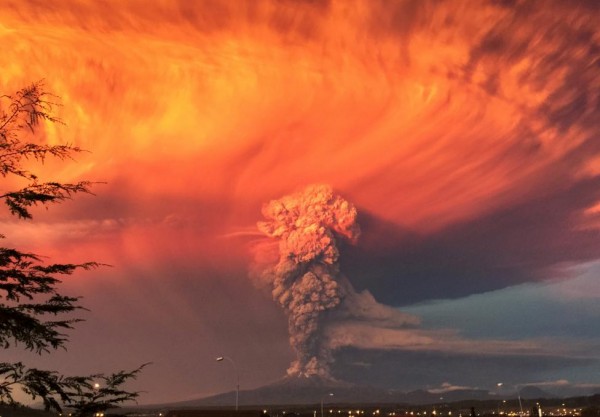 Smoke and ash rise from the Calbuco volcano as seen from the city of Puerto Montt, Chile, April 22, 2015. The volcano in southern Chile erupted for the first time in more than five decades on Wednesday, sending a thick plume of ash and smoke into the sky. REUTERS/Rafael Arenas
Share:
Ash from the Chilean volcano Calbuco, which erupted without warning this week, reached as far as southern Brazil on Saturday and prompted some airlines to cancel flights to the capitals of Chile, Argentina and Uruguay.

Calbuco, considered one of the most dangerous along Chile’s chain of around 2,000 volcanoes, erupted twice in 24 hours on Wednesday and Thursday, sending up a spectacular 17-km-high (11-mile) cloud and coating nearby towns in a thick layer of gray ash.

Authorities have set up a 20-km (12-mile) cordon around Calbuco, in the scenic Los Lagos region, around 1,000 km (620 miles) south of the capital Santiago, evacuating more than 6,500 people in the area.

“The dangerous nature of volcanic activity like this, plus the volcano’s current instability that could lead to more intense activity in the short term, indicates we should maintain the perimeter,” Chile’s national office of emergency said in its latest report.

Authorities allowed people who had been evacuated to return briefly on Saturday to check their houses and animals, and to pick up clothes and medication.

Some houses and schools located close to the volcano have collapsed under the weight of the ash.

The ash also presents a threat to air traffic, as particles in the atmosphere can cause problems for planes. With winds blowing the ash cloud northeast into Argentina, Argentine air traffic has been the worst affected so far.

Delta Air Lines (DAL.N), Air France (AIRF.PA), American Airlines (AAL.O), Air Canada (AC.TO) and Qantas Airways (QAN.AX) have all suspended flights from and to the airports of Santiago, Buenos Aires and Montevideo as a precautionary measure.

But Chile’s LAN LAN.SN and Aerolineas Argentinas were operating flights as usual from those airports.

“The situation is much better than yesterday,” said a spokesman for Argentina’s National Civil Aeronautic Administration.

“The airports (of Buenos Aires) are operating normally. The first ash cloud has already passed by and the second is on the move. American Airlines is not operating on their own accord, nor are Delta Air Lines, or United. They are evaluating the situation on a day-to-day basis.”

Some flights had also been canceled in southern Brazil, in Rio Grande do Sul, broadcaster O Globo reported. Officials from the Brazilian aviation agency Infraero were not immediately available for comment.

The head of Chile’s mining and geological service said on Friday the volcanic process could last for weeks.