Saudi-led coalition resumes bombing Yemen after Houthis captured a base 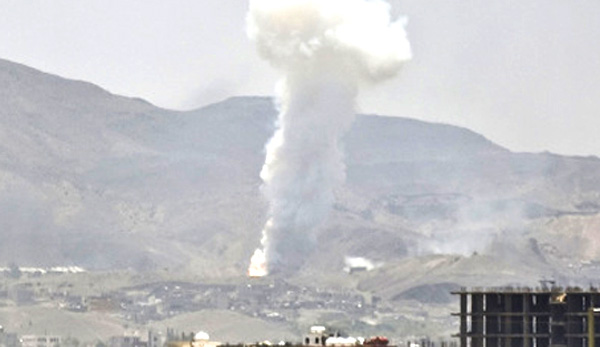 Saudi-led warplanes launched new strikes in Yemen Wednesday, hours after Riyadh announced a halt to the four-week air campaign, as rebels seized a key loyalist base in the third city Taez.
Share:
Saudi-led coalition warplanes bombed Yemen on Wednesday despite an announcement by Riyadh that it was ending its campaign of air strikes, while renewed fighting erupted on the ground between rebels and forces loyal to the exiled president.

The hostilities illustrated how tough it will be to find a political solution to a war stirring animosities between rival Gulf powers Saudi Arabia and Iran.

Tuesday’s announcement by Riyadh that it would end almost a month of air strikes against the Iranian-allied Houthis drew positive responses from both the White House and Tehran.

But hours later, air strikes and ground fighting resumed and the International Red Cross described the humanitarian situation as “catastrophic”. The rebel Houthi movement said it wanted a return to United Nations peace talks, but only after a complete halt to air strikes.

Also in southern Yemen, pro-Hadi militiamen fought against the Houthis and their army allies loyal to powerful ex-president Ali Abdullah Saleh, and residents in the port of Aden reported tank shelling and automatic gunfire.

Yemen’s south has been a bulwark of resistance against the Houthi advance and locals expressed dismay at the end to Saudi strikes, which had supported their forces.

“The decision was strange and totally unexpected. Our fighters had made gains but needed more Saudi air support, now we hear the Houthis and Saleh’s people are advancing in many places,” said Aden resident Saleh Salem Ba Aqeel.

Saudi Arabia’s military intervention in Yemen shows that the Sunni monarchy will stand up to Iran and that Arab states can protect their interests without U.S. leadership, the kingdom’s ambassador to Britain, Prince Mohammed bin Nawaf, told Reuters in an interview.

Saudi Arabia’s announcement that it would end its campaign cast doubt over its next moves against its Houthi enemies, whose seizure of swathes of Yemen in recent months stirred Saudi fears that Iran is acquiring decisive influence in a country Riyadh sees as its backyard.

A Gulf official told Reuters that the new phase would see a downscaling of military activity by the Saudi-led coalition with no further bombing of fixed military targets.

On the political front, the official said, there was movement toward a dialogue, and that both Saleh’s followers and the Houthis should have a voice in the discussions.

Saleh welcomed the Saudi announcement and called for talks, while the Houthis have yet to react beyond calling for mass protests against the Saudi “aggression” for Thursday.

A Yemeni official told Reuters that the warring parties were discussing a seven-point peace plan offered by neighboring Oman, which has stayed neutral in the conflict, involving the reinstatement of Hadi’s government and a Houthi withdrawal from leading cities – previously non-starters for the group.

The White House on Wednesday said Yemen remained unstable and much more work needed to be done in the region on a diplomatic solution, despite the declared halt to the Saudi-led bombing.

Saudi Arabia said a new phase called “Operation Restoring Hope” would now begin in which political, diplomatic and military action would be combined but the main focus would be on the political process and aid efforts.

The conflict has created severe shortages of food and other supplies by closing sea and airports. The World Health Organization said on Tuesday that 944 people were reported killed and 3,487 wounded in Yemen in the month up to Friday.

The United States said on Monday an aircraft carrier and guided-missile cruiser had gone to waters off Yemen to join seven other U.S. warships already in the area.

The Pentagon said the ships were there to ensure freedom of navigation through the area, which is vital to oil shipping and controls approaches to the Red Sea and the Suez Canal.

It said the ships were also watching a flotilla of Iranian cargo vessels that had approachedYemen. The U.N. Security Council has imposed an arms embargo on the Houthis, and the Saudi navy has imposed a naval and air blockade around the country that it says it will maintain in the coming phase.

President Barack Obama warned Iran on Tuesday not to send weapons to Yemen that could be used to threaten shipping traffic in the region.

Iran called for all sides in Yemen’s conflict to start negotiations, saying long-term peace was possible.

“History has demonstrated that military intervention is not a proper response to these crises and will instead exacerbate the situation,” Iran’s President Hassan Rouhani said at an Asian-African conference in Jakarta.

The United States and Saudi Arabia have accused Shi’ite Iran of arming the Houthis, a claim Iran denies.

“Fear of Iran is part of a Saudi-American plan to bury Yemen’s revolution which rejected their hegemony,” top Houthi leader Saleh al-Sammad told Reuters. “There are no Iranian weapons here.”