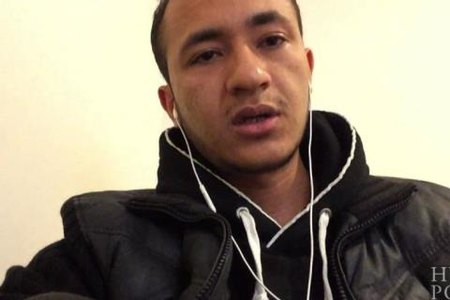 Qusai Zakarya, a victim of a 2013 chemical weapons attack in Syria told UN Security council: “I lost my ability to breathe, my chest was set on fire, my eyes were burning.”
Share:

“I lost my ability to breathe, my chest was set on fire, my eyes were burning,” Zakarya said. “I had to punch my breast over and over again until I managed to get a single breath.”

Zakarya, along with two Syrian medical doctors, gave testimony to the UN Security Council about alleged chlorine gas attacks in Syria during a closed-door meeting on Thursday.

The witnesses spoke to reporters after the closed-door council meeting.

Representatives from all 15 countries of the council were present at the US-sponsored informal meeting where attendance was optional for members, said Samantha Power, US ambassador to the UN, who described the testimony as “graphic” and “moving.”

The council was shown a video of doctors in a field hospital in the northwestern city of Sarmin trying to resuscitate three children who had been exposed to toxic chemical agents dropped from helicopters on March 16. Five similar attacks followed.

Mohammad Tennari, one of the doctors at the hospital treating patients after the attacks, said that the symptoms, which included severe shortness of breath and vomiting, were consistent with chlorine exposure.

“We have been dying every day because of missiles and barrel bombs, and now toxic agents,” Tennari said through an interpreter.

“Our message to the international community [is] — please stop death in Syria.”

Zakarya, who was almost killed by the August 21, 2013, Sarin gas attack in Ghouta, told reporters he had pleaded with the council to do something to stop chemical weapons attacks.

He reminded the council that because of their failure to refer Syria to the International Criminal Court, “this crime was left without punishment.”

Power said members of the council were “visibly moved.”

“Almost every council member prefaced what they said by saying ‘Forgive me if I don’t use diplomatic language but I’m so moved’ or ‘so overwhelmed by what I have seen’,” she said.

The council has previously warned Syria that chlorine gas constitutes a chemical weapon, the use of which is forbidden under a council resolution passed in 2013.

Power said that the document calling for the elimination of chemical weapons in Syria was an “unusual” case of cooperation in the council, which was “very much a product of US-Russian cooperation,” however, it has not resulted in the end of all chemical weapons use.

“It is now in our view for the council … to get past the old divisions, draw on the unity that we have been shown on the single issue of chemical weapons and stop these attacks from happening,” Power said.

A fact-finding mission by the Organisation for the Prohibition of Chemical Weapons is currently investigating the alleged chlorine gas attacks.

The Syrian government is seen as the culprit in the attacks by toxic agents as the rebels don’t have aerial vehicles.

The government has claimed that rebel forces have also used chlorine during attacks.