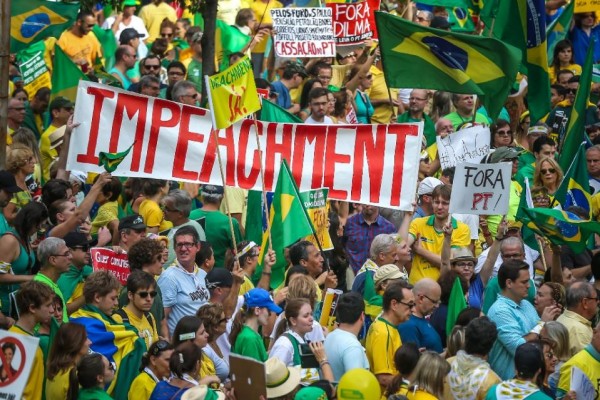 Brazilian demonstrators take part in a protest against the government of president Dilma Rousseff in Porto Alegre, Brazil on April 12, 2015 (AFP Photo/Jefferson Bernardes)
Share:
Brasilia (Brazil) – Hundreds of thousands of Brazilians took to the streets Sunday, venting anger over government corruption and a souring economy a month after protests gathered more than a million people.

With cries of “Dilma out” and “corrupt government,” marchers — many wearing the yellow and green jerseys of the national football team — called for President Dilma Rousseff’s ouster and an end to impunity for corruption.

Police put turnout at 682,000 people who marched in 195 cities, while organizers gave a total estimate of 1.5 million — around half of them attending the largest gathering, in business center Sao Paulo.

Those pocketbook issues — as well as the perceived erosion of workers’ rights — have fueled growing opposition to the leftist president, re-elected in October.

Rio hosted two modest protests at the tourist magnet of Copacabana beach, where media put participants at some 10,000.

But an afternoon march in business hub Sao Paulo drew a much larger crowd of about 275,000, according to police.
The 800,000 estimate by organizers in the city would put the national total on par with last month’s demonstrations.

“It is very difficult to draw the masses out onto the streets every month,” political analyst Andre Cesar told AFP, citing a lack of central leadership to galvanize a diffuse protest movement.

Dianara Loubet, a 75-year-old yoga instructor, said “we have come to show what is going on in Brazil — this government is doing nothing. The people must show their dissatisfaction.”

Marchers converged on the capital Brasilia, where some protesters hung a banner calling for the army to intervene.

Similar protests on March 15 brought out more than 1.7 million people, according to police, although pollsters Datafolha questioned a police figure of around a million in Sao Paulo figures as vastly inflated.
“We want all of Brazil to come out into the streets (but) we are not here to break records,” said Rizzia Arreiro, a 35-year-old Rio protester from the Vem Pra Rua (“take to the streets”) protest group.

Public confidence in Brazil’s political class has slumped with the detention or questioning of dozens of lawmakers and officials, including the treasurer of the ruling Workers Party over an alleged multibillion-dollar kickback scheme at Petrobras.

Thomaz Albuquerque, a 38-year-old attending a Copacabana rally, pointed to “political and legal reasons to call for Dilma’s impeachment.”

“She was the president of the Petrobras board during the worst phase of the ‘Petrolao’ graft scandal. That is reason enough,” Albuquerque said.

Rousseff is herself not under investigation, despite her former ties to the company, but the widening probe has fingered a swath of her party colleagues and close allies.

A Datafolha poll out Saturday found that 63 percent of a 2,800-strong sample said Rousseff should personally be investigated but 64 percent said she would remain office even if under investigation.

Eight in 10 Brazilians said Rousseff was aware of the dealings at Petrobras, a claim she vehemently denies.

Rousseff’s popularity ratings have crashed below 20 percent, not just because of the Petrobras affair but also as a result of a staggering economy after four years of anemic growth.

Rousseff has responded with budget cuts, but promised to protect welfare programs that form the foundation of support for her party.
Yahoo/AFP