“President Obama is an honest man,” Castro declared in Panama 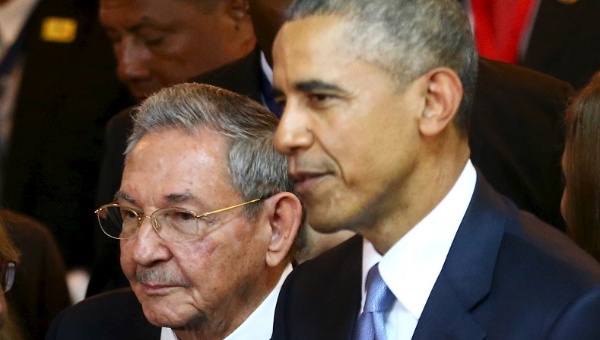 For the first time in more than half a century, the presidents of the United States and Cuba met face to face Saturday, formalizing their joint bid to restore diplomatic ties and break from the nations’ Cold War past, an effort President Obama said could be a “turning point” for the region.

The symbolism of Obama and Cuban President Raul Castro seated beside each other was itself a sign of progress in the nearly four months since Obama and Castro first announced efforts to restore full diplomatic relations.

But far more tangible hurdles must still be overcome, both in negotiations between the two governments over reopening embassies, ending Cuba’s designation by the U.S. as a state sponsor of terrorism and other topics, and in Congress, where lifting the decades-long embargo is an all-but-certain non-starter.

Obama and Castro each conceded there might still be barriers, particularly America’s insistence on addressing human rights abuses. 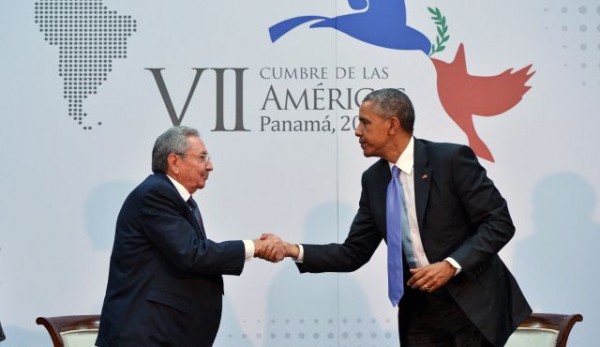 “But I think what we have both concluded is that we can disagree with the spirit of respect and civility, and that over time it is possible for us to turn the page and develop a new relationship in our two countries,” Obama said.

“We are willing to discuss everything, but we need to be patient, very patient,” Castro said. “We can be persuaded on some things, perhaps not on others.”

Saturday’s encounter — which the White House considered an informal “pull-aside” instead of bilateral meeting — comes just more than a week after the administration announced a framework agreement that would seek to contain Iran’s nuclear program. The two initiatives are grounded in Obama’s pledge as a candidate to engage even with America’s adversaries.

As he did in discussing the Iran negotiations in the Rose Garden early this month, Obama cast his approach to Cuba in historic terms.

“The Cold War has been over for a long time,” Obama said in earlier remarks at the summit. “And I’m not interested in having battles frankly that started before I was born.”

Castro also said he did not hold Obama responsible for U.S. policies that had endured through 10 previous presidential administrations. He said he’d read Obama’s books, and praised his humble beginnings.

“In my opinion, President Obama is an honest man,” Castro said.

The previous Cuba policy has also been a barrier to Obama’s goal of restoring U.S. influence in the region and increasing cooperation on economic and security issues. And Cuba’s participation in this triennial summit was a point of celebration among those in attendance. 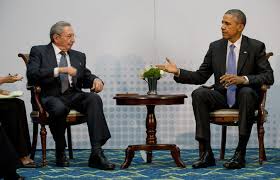 U.N. Secretary-General Ban Ki-moon said Friday that Castro’s presence “embodies a longing expressed by many in the region.” The audience at an inaugural ceremony applauded enthusiastically as Jose Miguel Insulza, secretary-general of the Organization of American States, said he hoped the “full normalization” of ties between the U.S. and Cuba would soon result from the new consultations.

According to U.S. officials, important steps, including removing Cuba’s designation as a state sponsor of terrorism, could be taken in the “coming days.” Both presidents committed to reopening embassies in Havana and Washington soon as well, and directed aides to resolve outstanding issues such as the freedom of U.S. diplomats to travel throughout Cuba and Cuban diplomats to be allowed to travel outside Washington.

The two men also took time to reflect on the significance of the moment. The last U.S. president to meet with his Cuban counterpart was Dwight D. Eisenhower, in 1956 with Fulgencio Batista. Three years later, after rebels toppled the dictator, Fidel Castro met with Vice President Richard M. Nixon.

The U.S. closed its embassy in Havana in January 1961. Three months later, it backed the failed invasion of the island by Cuban dissidents that drew its name from the site of the landing: the Bay of Pigs.

“A lot of the meeting was spent on just taking stock of how significant this moment is,” said an official who requested anonymity while discussing the talks.

Obama ran in 2008 on a platform that included reexamining the U.S.-Cuba relationship and engaging even personally with longtime adversaries. In December 2013, Obama and Raul Castro shook hands briefly at the funeral of Nelson Mandela in South Africa, just before aides would begin substantive discussions that paved the way for the conversation in December between the two launching formal normalization efforts.

Saturday’s meeting was the third recent contact between the two in the last few days. The two men spoke by phone Wednesday before traveling to Panama, where they had a brief handshake greeting Friday at the opening of the summit.

Bruno Rodriguez, the Cuban foreign minister, described the meeting Saturday as a “first stage” aimed at “creating the appropriate context” for normalizing relations.

“There has been progress but I hope we can create the appropriate regional context,” he said. “A principal result is that these two governments now know each other better. We have a better understanding of our common ground, a better idea of our mutual interests … and also better knowledge of the scope and depth of our differences.”

Obama gave a nod to that progress, saying that “Cuba’s not a threat to the United States” and noting that the changes underway were “a more profound shift for them than it is for us.”

Cuba’s inclusion in the summit came as a result of pressure from the rest of Latin America as well as the December announcement that the U.S. and Cuba would reestablish diplomatic ties after more than 50 years of enmity.

Leaders from Argentina, Bolivia and Ecuador nonetheless continued to criticize the U.S. for its strong hand in the region. President Rafael Correa of Ecuador called the embargo of Cuba “illegal” and called for the U.S. to return to Cuban control the U.S. Navy base at Guantanamo Bay.

Obama later referred to what he derisively called Correa’s “history lesson,” and said he was the first to acknowledge that the U.S. hasn’t always stood up for the values it professes.

“America doesn’t make claim about being perfect,” he said. “We do make claim to being open to change.”

Republicans continue to criticize of the president’s efforts at rapprochement. Rep. Jeff Duncan (R-S.C.), who is leading a congressional delegation to the summit, promised that Congress would vigorously review any further steps toward normalization.

“The unrelenting and merciless oppression of the Cuban people by a regime hostile to liberty is a direct rejection of the values we as Americans hold as sacred,” he said in a statement. “No regime should be rewarded for such appalling acts.”

But Rep. Barbara Lee (D-Oakland), a longtime advocate for changing U.S. policy on Cuba who is also attending the summit, praised the steps Obama has taken and said she hopes an announcement about opening embassies in both nations will come soon.

“We were isolated because of our policy toward Cuba,” she said. “This is a very important moment for the United States in terms of our own national security.”