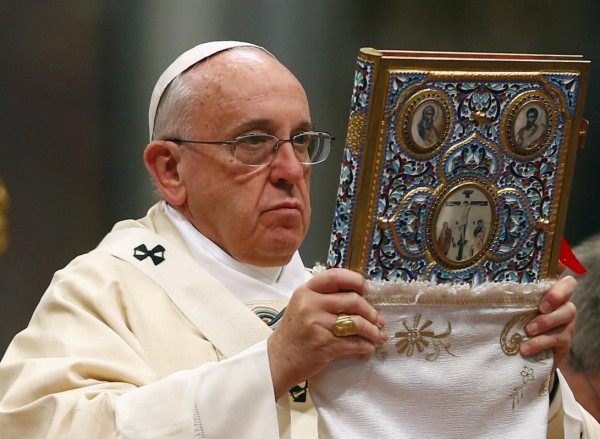 Francis, who has close ties to the Armenian community from his days in Argentina, defended his pronouncement by saying it was his duty to honor the memory of the innocent men, women, children, priests and bishops who were “senselessly” murdered by Ottoman Turks.

“Concealing or denying evil is like allowing a wound to keep bleeding without bandaging it,” he said at the start of a Mass Sunday in the Armenian Catholic rite in St. Peter’s Basilica honoring the centenary.

In a subsequent message directed to all Armenians, Francis called on all heads of state and international organizations to recognize the truth of what transpired and oppose such crimes “without ceding to ambiguity or compromise.”

Historians estimate that up to 1.5 million Armenians were killed by Ottoman Turks around the time of World War I, an event widely viewed by scholars as the first genocide of the 20th century.

Turkey, however, refuses to call it a genocide and has insisted that the toll has been inflated, and that those killed were victims of civil war and unrest. It has fiercely lobbied to prevent countries, including the Holy See, from officially recognizing the Armenian massacre as genocide.

Turkey’s embassy to the Holy See canceled a planned news conference for Sunday, presumably after learning that the pope would utter the word “genocide” over its objections. Requests for comment went unanswered and there was no official word Sunday from the government in Ankara.
Francis’ words had immediate effect in St. Peters, bolstering the head of the Armenian Apostolic Church, Aram I, to thank Francis for his clear condemnation and recall that “genocide” is a crime against humanity that requires reparation.

“International law spells out clearly that condemnation, recognition and reparation of a genocide are closely interconnected,” Aram said in English at the end of the Mass to applause from the pews.

Speaking as if he were at a political rally, Aram said the Armenian cause is a cause of justice, and that justice is a gift of God. “Therefore, the violation of justice is a sin against God,” he said.

Several European countries recognize the massacres as genocide, though Italy and the United States, for example, have avoided using the term officially given the importance they place on Turkey as an ally.

The Holy See, too, places great importance in its relationship with the moderate Muslim nation, especially as it demands Muslim leaders condemn the slaughter of Christians by Muslim extremists in neighboring Iraq and Syria.
But Francis’ willingness to rile Ankara with his words showed once again that he has few qualms about taking diplomatic risks for issues close to his heart. He took a similar risk by inviting the Israeli and Palestinian presidents to pray together for peace at the Vatican — a summit that was followed by the outbreak of fighting in the Gaza Strip.

Francis is not the first pope to call the massacre a genocide. In his remarks, Francis cited a 2001 declaration signed by St. John Paul II and the Armenian church leader, Karenkin II, which said the deaths were considered “the first genocide of the 20th century.”

Emeritus Pope Benedict XVI, whose ties with Turkey and the Muslim world were initially strained, avoided using the “g-word” during his pontificate.

The context of Francis’ pronunciation was significant: He uttered the words during an Armenian rite Mass in St. Peter’s Basilica marking the 100th anniversary of the slaughter, alongside the Armenian Catholic patriarch, Nerses Bedros XIX Tarmouni, Armenian Christian church leaders and Armenian President Serzh Sargsyan, who sat in a place of honor in the basilica.

While Francis was archbishop of Buenos Aires, the former Cardinal Jorge Mario Bergoglio was particularly close to the Armenian community and he referred to the Armenian “genocide” on several occasions.

The definition of genocide has long been contentious. The United Nations in 1948 defined genocide as killing and other acts intended to destroy a national, ethnic, racial or religious group, but many dispute which mass killings should be called genocide.

In his remarks Sunday, Francis said the Armenian slaughter was the first of three “massive and unprecedented” genocides last century that was followed by the Holocaust and Stalinism. He said other mass killings had followed, including in Cambodia, Rwanda, Burundi and Bosnia.

“It seems that the human family has refused to learn from its mistakes caused by the law of terror, so that today too there are those who attempt to eliminate others with the help of a few and with the complicit silence of others who simply stand by,” he said.

Francis has frequently denounced the “complicit silence” of the world community in the face of the modern-day slaughter of Christians and other religious minorities by Islamic extremists.

During Sunday’s Mass, Francis also honored the Armenian community at the start of the Mass by pronouncing a 10th-century Armenian mystic, St. Gregory of Narek, a doctor of the church. Only 35 people have been given the title, which is reserved for those whose writings have greatly served the universal church.

The Mass was rich in traditional Armenian music, with haunting hymns used at key points. Children dressed in traditional costumes presented the gifts at the altar, which was bathed in a cloud of incense.