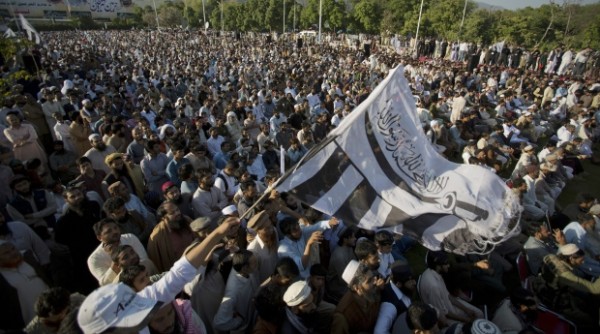 Supporters of Pakistani religious group Jamat ud Dawa chant slogans in favor of the Saudi Arabian government, during a rally in Islamabad, Pakistan on April 9, 2015. (AP / B.K. Bangash)
Share:
Pakistan’s parliament voted on Friday not to join the Saudi-led military intervention in Yemen, dashing Riyadh’s hopes for powerful support from outside of the region in its fight to halt the advance of Iranian-allied Houthi rebels.

Saudi Arabia had asked fellow Sunni-majority Pakistan to provide ships, aircraft and troops for the campaign, now in its third week, to stem the influence of Shi’ite Iran in what appears to be proxy war between the Gulf’s two dominant powers.

While Saudi Arabia has the support of its Sunni Gulf Arab neighbors, Pakistan’s parliament voted against becoming militarily involved.

It adopted a draft resolution calling on all sides to resolve their differences peacefully in a “deteriorating security and humanitarian situation” which has “implications for peace and stability of the region.”

“(Parliament) desires that Pakistan should maintain neutrality in the Yemen conflict so as to be able to play a proactive diplomatic role to end the crisis,” it said, while expressing “unequivocal support for the Kingdom of Saudi Arabia” and promising to “stand shoulder to shoulder with Saudi Arabia and its people” if Saudi territory were violated.

Pakistan’s government has yet to comment publicly on the draft but has said it would comply with parliament’s decision.

The Saudi-led coalition began air strikes in Yemen against the Houthis on March 26 after the rebels, who already control the capital, began a rapid advance towards the southern port city of Aden.

Saudi Arabia is concerned that the violence could spill over the border it shares with Yemen, and is also worried about the influence of Iran, which has denied Saudi allegations it has provided direct military support to the Houthis.

The air raids, which hit the Defence Ministry and other facilities, lasted hours, residents told Reuters. “The sky was lit up,” said Fadel Muhammad. “We heard big explosions.”

Saleh is still influential in the military, despite giving up power in 2012 after mass protests against his rule, complicating efforts to stabilize the country.

Troops loyal to him are backing Houthi forces fighting his successor President Abd-Rabbu Mansour Hadi, a former general seen by the Houthis as a pawn of Sunni Gulf Arab monarchies and the West. Hadi has fled to Saudi Arabia.

Yemen’s 150,000 barrel-per-day Aden refinery has shut as the conflict worsened, industry sources said. The refinery earlier suspended its tender process for importing oil products, due to the crisis and several tankers headed to the country have been diverted away.

Aden residents said electricity and water had been cut in several districts, rubbish had been left uncollected and hospitals were unable to cope with the number of wounded.

“The humanitarian situation in Aden is catastrophic and disastrous, both in terms of the rising number of killed and injured as well as in declining capabilities of medics, along with shortages in water and electricity,” local health ministry official Al-Khadr Lawsar said.

“We call on fighters to adhere to international law and respect the work of ambulances and medical staff in the field,” he added, citing the fatal shooting of two brothers working for the Red Crescent while evacuating wounded last week.

An Indian ship captain working in Aden was killed in shelling on the city’s dockyard overnight, his company announced, and local media reported that Houthi and allied army units had fired mortars into the area.

An air strike hit a local government compound in the northern suburb of Dar Saad and fires in Aden’s outskirts sent plumes of smoke into the air.

They were brought in by the International Committee of the Red Cross and the United Nations Children’s Fund, UNICEF, which had been trying for days to get aid flights into the country.