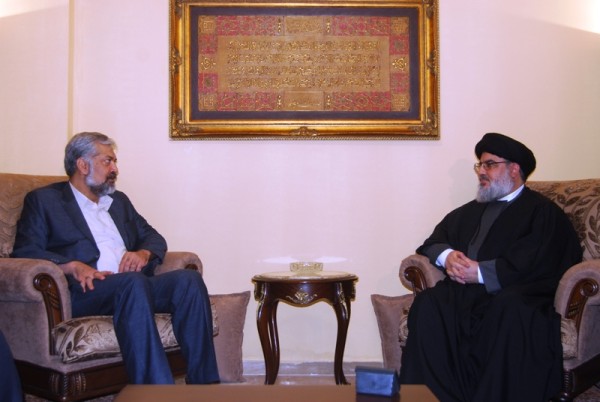 As was widely expected the special envoy of Iranian President Hassan Rouhani, Morteza Sarmadi, met during his visit to Lebanon with Hezbollah chief Hassan Nasrallah at an undisclosed location.

He stressed following the meeting that the presidential issue in Lebanon could only be resolved by consensus among the Lebanese.

“Such a local matter could only be resolved by the rival parties and the key issue is consensus among the Lebanese,” Sarmadi said in an interview published in As Safir newspaper published on Friday.

He stressed that Tehran supports any agreement that the Lebanese reach over the identity of the new president.

The Lebanese parliament failed last week and for the 21st time in a row to elect a president to replace Michel Suleiman whose six-year term ended on May 25th last year.

Speaker Nabih Berri was hoping that the Iran deal with the west would pave the way for a green light from Iran on the presidency , but judging from Sarmadi’s comment there is no change.

The Iranian diplomat who is deputy foreign minister, arrived in Lebanon 3 days ago . He reiterated on Wednesday Iran’s call for an immediate halt to the two-week-old military campaign being led by Saudi Arabia against Yemeni Houthis who have seized much of Yemen and forced its Saudi-backed president to flee.

Saudi Arabia accuses Iran of providing military support to the Houthis, a charge the Islamic Republic denied, while confirmed by the US.

The Saudi-led campaign has failed stop the Houthis and allied soldiers loyal to former president Ali Abdullah Saleh from pushing into the port city of Aden, from where Saudi-backed President Abd-Rabbu Mansour Hadi was forced to flee last month.

While in Lebanon the Iranian diplomat met several Lebanese officials and reportedly visited the grave of slain top Hezbollah operative Imad Mughnieh who was killed by an Israeli airstrike in Syria near the Golan borders last January, along with several other Hezbollah fighters and an Iranian general.