Iraq’s real challenge is winning over the Sunnis 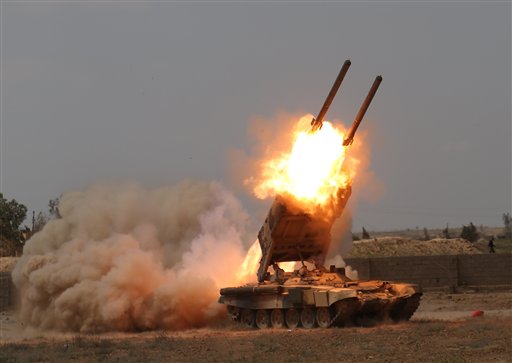 FILE – In this file photo taken Tuesday, March 31, 2015, Iraqi security forces launch rockets against Islamic State extremist positions in Tikrit, 80 miles (130 kilometers) north of Baghdad. Iraq won the battle to retake the city of Tikrit from the Islamic State group, backed by a coalition of the unlikely in Iranian advisers, Shiite militias and U.S.-led airstrikes, but the country now faces what could be its most important battle: Winning the support of the Sunni. (AP Photo/Khalid Mohammed, File)
Share:

Iraq won the battle to retake the city of Tikrit from the Islamic State group, backed by a coalition of the unlikely in Iranian advisers, Shiite militias, and U.S.-led airstrikes, but the country now faces what could be its most important battle: Winning the support of the Sunni.

Sunni tribes played a key role during the U.S. occupation fighting back al-Qaida in Iraq, the Islamic State group’s predecessor, and their distrust of Baghdad’s Shiite-led government eased the extremists’ takeover last summer. But as Tikrit now sits in ruins, still patrolled by fractious Shiite militias, the powerful Sunni tribes remain as distrustful as ever as further offensives in their heartland loom.

The government “needs those local tribes to secure the territory and hold the fort until government function is restored in these areas,” said Sajad Jiyad, a senior researcher at al-Bayan Center for Studies and Planning in Baghdad. “The government needs to make sure that everyone who fights today has a future in Iraq tomorrow — and not just to find a short-term military solution today and forget about them later.”

When the Islamic State group swept across a third of Iraq last summer, many Sunnis initially greeted them as liberators. Analysts believe members of Saddam’s outlawed Baath Party, stacked largely with Sunnis, also aided the extremists.

The few Sunni tribes that stood up against the Islamic State group have paid a heavy price. In the Salahuddin town of Duluiyah, a mass grave holds the remains of 150 people from the al-Jabour tribe, killed by the militants in December. The militants also killed more than 200 men, women and children from the Sunni Al Bu Nimr tribe in Anbar province in November. The mass killings offered a stark warning to others considering aiding the government.

The government-backed Popular Mobilization Forces, comprised mainly of Shiite militias, have been a driving force in most of the successful battles against the militant group. But little remains of those towns — with several human rights groups pointing to the militias as the culprits for that destruction. The powerful, Iranian-backed militias have been accused in the past of atrocities ranging from driving Sunni families from their homes, to kidnapping and, in some cases executions.

In Tikrit, fighting damaged many homes. Access to electricity and water is sporadic and roads are cratered and impassable in some parts of the city. While the government has blamed criminal gangs for loot, others have blamed the militiamen.

“People in Mosul are less enthusiastic about the entry of … the militias into the city now because the militias have been acting like those people in Daesh who looted the houses of Christians in Mosul,” said Ali Mohammed Jassim, a teacher from Mosul now displaced in Kirkuk, who used an Arabic acronym for the extremists.

Prime Minister Haider al-Abadi has called on security forces to halt looting and vandalism in Tikrit, promising a fund would be established to help residents return to Tikrit. He did not elaborate, but analysts say such a step is needed.

Efforts to merge small, but symbolic Sunni battalions with the Iraqi military were tested in the Tikrit battle, with as many as 200 men, mainly from al-Jabour tribe, joining government-backed forces. The objective is ultimately to plant the seed for a local national guard force that would remain in Tikrit and other recaptured cities.

But rising tensions between the Iraqi military and the Popular Mobilization Forces is raising concerns. Several pulled out of the Tikrit operations after the U.S.-led coalition began airstrikes there to boost the then-stalled operation. They quickly rejoined the fight, but the temporary division among Iraq’s military and the militias highlighted growing tensions.

“Shiite groups have rarely made as solid an alliance as they did in the early months of the fight against ISIS,” said Hassan Hassan, co-author of the book “ISIS: Inside the Army of Terror,” using an alternate acronym for the militant group. “Differences among the anti-ISIS forces will increase when the battle stalls. But generally, there are competing points-of-view in Baghdad regarding the role of Iran and the fight against ISIS. Some of them are too close to Iran and some are not.”

As Iraq looks ahead to its next battlefront — most likely in Anbar province — the government has a key opportunity to demonstrate its desire to protect Sunni communities and empower the Sunni tribesmen to oversee law and order once the Islamic State group is abolished and normalcy is restored.

Many of the tribes in Anbar have demanded weapons and payments from the government, in the same way that many of the Shiite militias have received government assistance. Hamid al-Mutlaq, a prominent Sunni lawmaker, said political reconciliation must be the ultimate priority moving forward if the government expects to see successes in Anbar and Nineveh.

“The Anbar tribes, Iraqi army and the police are able to do the job without the help of the (Shiite) militias,” he said. “The exclusion of the militias from the Anbar battle should be the first step taken by the government in order to restore trust with the people of Anbar.”