Iran hardliners, Israel and US Republicans criticize the nuclear deal 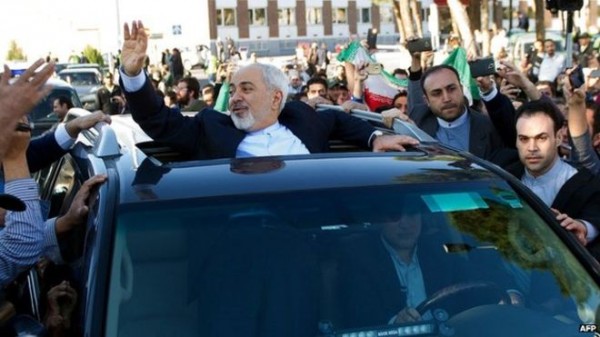 Iran’s foreign minister Javad Zarif was given a hero’s welcome upon his return to Tehran on Friday morning, a day after signing the framework
Share:

Hardliners in Iran have criticized the preliminary agreement with world powers on their country’s nuclear program.
The framework deal, the full details of which have still to be agreed, will see Iran curb sensitive nuclear activities in return for relief from sanctions.

Hossein Shariatmadari, an adviser to Supreme Leader Ayatollah Ali Khamenei, said Iran had exchanged its “saddled horse” for one with a “broken bridle”.

But many people have been celebrating the deal on the streets of Tehran.

Israel meanwhile called it “a step in a very, very dangerous direction”.

Government spokesman Mark Regev said Iran would be left with an expansive nuclear infrastructure and able to pursue what he alleged was its “single goal” of developing a nuclear weapon.


Hossein Shariatmadari, an adviser to Supreme Leader Ayatollah Ali Khamenei, said Iran had exchanged its “saddled horse” for one with a “broken bridle”.

Iranian officials have insisted that they have no such ambitions.

Iran’s foreign minister was given a hero’s welcome upon his return to Tehran on Friday morning, a day after signing the framework deal with the so-called P5+1 – the US, UK, France, Russia, China and Germany – in Lausanne, Switzerland.

Dozens of people surrounded Mohammad Javad Zarif’s car as it left Mehrabad airport, chanting slogans in support of him and President Hassan Rouhani, who was elected in 2013 after promising to end years of crippling sanctions imposed on Iran because of concerns about its nuclear programme.

Before leaving the airport, Mr Zarif warned that much work remained to be done if a comprehensive accord was to be finalised before the deadline of 30 June.

But he added: “We have serious goals in the negotiations and eventually, based on what we have achieved so far, we believe we can reach them.”

Mr Zarif also praised Ayatollah Khamenei for “his remarkable support for the negotiating team and his guidance” over the past 18 months.

The Supreme Leader, who has the final say on all state matters, has so far not commented.

But Hossein Shariatmadari, one of his advisers and editor of the influential hardline newspaper Kayhan, expressed his disappointment.

“To sum up the deal framework in one sentence – we handed over a saddled horse and received a broken bridle in return,” he told the semi-official Fars news agency.

Another conservative analyst, Mehdi Mohammadi, called the deal “in no way balanced”. He told Fars that it represented a “disaster for Fordo”, the underground nuclear facility that will remain open but not used for enriching uranium.

US President Barack Obama said the framework agreement would make the world a safer place, as it would “cut off every pathway that Iran could take to develop a nuclear weapon”.

In addition to halting enrichment at Fordo, Iran will cut by more than two-thirds to 5,060 the number of centrifuges it currently operates to enrich uranium. While enriched uranium is used as fuel for nuclear reactors, it can also be used to make nuclear bombs.

Iran will also cut its stockpile of low-enriched uranium from around 10 tonnes to 300kg for 15 years, and the design of the heavy-water reactor under construction at Arak will be modified so it produces no weapons-grade plutonium.

In return, UN sanctions and separate measures imposed unilaterally by the US and EU will be gradually suspended as the global nuclear watchdog, the International Atomic Energy Agency (IAEA), confirms Iranian compliance.

The US says Iran has agreed to allow IAEA inspectors travel “anywhere in the country” to investigate “suspicious sites or allegations of covert enrichment”.

There’s been celebration through the night across Iran and a hero’s welcome for Foreign Minister Javad Zarif. But the deal he’s brought home has been dismissed by hardliners who say Iran surrendered too much in exchange for too little.

John Kerry also faces a mix of support and skepticism in the US Congress. The loudest condemnation has come from Israel’s Prime Minister Netanyahu, who insists this deal doesn’t block but helps Iran build a nuclear bomb.


John Kerry also faces a mix of support and skepticism in the US Congress. The loudest condemnation has come from Israel’s Prime Minister Netanyahu, who insists this deal doesn’t block but helps Iran build a nuclear bomb.

As hard as it was to reach this preliminary agreement, it will be even harder to draft a final deal by the end of June. But, if negotiators do it, it will be a victory for diplomacy which, they believe will make the world a much safer place. 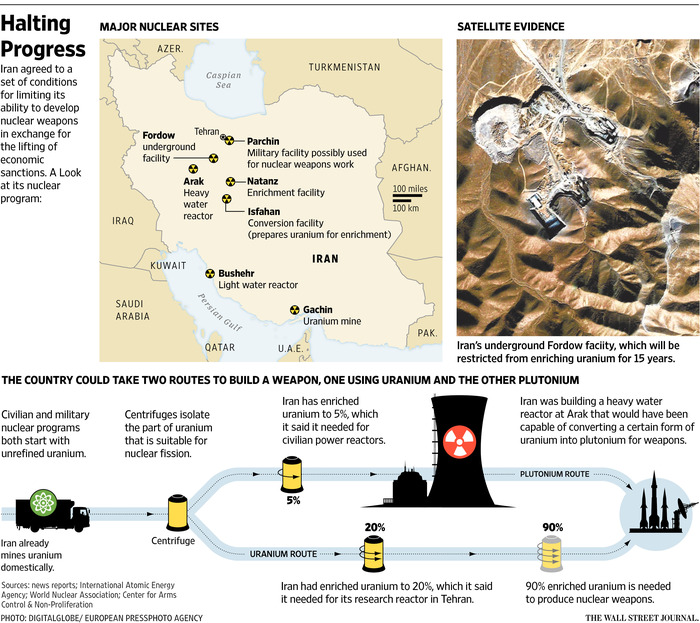