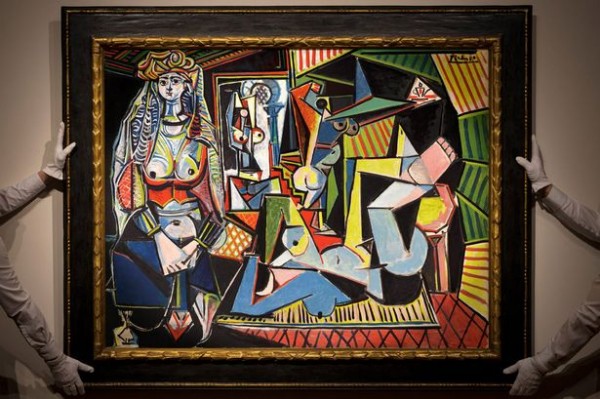 Picasso masterpiece “Les Femmes d’Alger” ( Women of Algiers) went on show for the first time in Hong Kong Wednesday ahead of an auction where it is tipped to smash the world record price for a painting.

The 1955 piece depicts women in a harem and is the final work in a 15-painting series which pays homage to the 19th century artist Delacroix, who Picasso admired.

It is billed to fetch an estimated $140 million when it goes on sale at Christie’s in New York in May — but the auction house says the price could well go higher.

The current world record for any painting sold at auction is for Francis Bacon’s “Three Studies of Lucian Freud”, which sold for $142 million in 2013, also at Christie’s in New York.

“In terms of Picasso’s quality, it’s at the absolutely top end. It’s an extremely important piece,” he said.

The painting was unveiled as part of a preview at Christie’s in Hong Kong ahead of the New York sale and it will also go on show in London later this month.

The piece is inspired by a Delacroix painting of a similar name.

It is also a stylistic tribute to Picasso’s friend and great rival, Henri Matisse, who died five weeks before Picasso began the series.

Gillman predicted the painting would make a stellar sale.

“It’s perfectly possible that it will break records,” he said, adding that the growing number of wealthy private collectors around the world meant artworks were being “pushed to price levels we haven’t seen before”.

Christie’s has not identified the collector selling the painting, but Gillman said another private buyer would likely snap it up as museums would struggle to find the money.

Christie’s had concealed the Picasso behind a red curtain at its headquarters in Hong Kong on Wednesday before unveiling it at the preview, a day before it goes on show to the public.

It is the highlight of the “Looking Forward to the Past” sale in New York on May 11, which will also feature works by other masters of the 20th Century, including Monet, Magritte and Rothko