Iraq: ISIS just suffered its worst defeat yet, loses the city of Tikrit 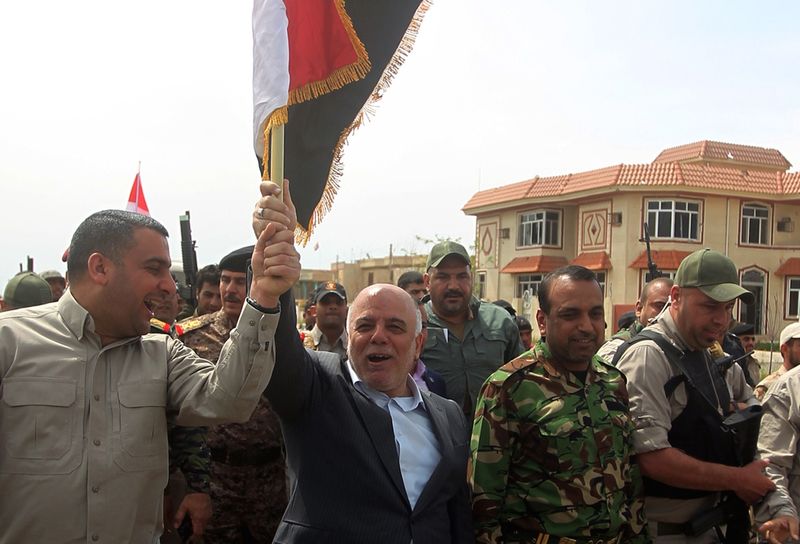 Tikrit, Saddam Hussein’s hometown, had been an ISIS stronghold for almost a year. On Wednesday, Iraqi Prime Minister Haider al-Abadi marched through the city’s center holding an Iraqi flag. Though fighting continued in some neighborhoods, the core of the city had been liberated from ISIS.
This is a major victory for Iraq: Tikrit is the largest city yet to be pried from ISIS’s grasp.

But Baghdad might want to hold off celebrating just yet. The big, looming problem facing Iraq isn’t just taking territory back from ISIS: it’s holding it.

In Tikrit, as in virtually all of the territory held by ISIS in Iraq, the residents are largely Sunni Muslims. One of the key ways ISIS’s Sunni extremists were able to grow so strong in Iraq was by exploiting the deep rift between the Sunni minority and Shia majority. Iraq’s government must convince Sunnis in places like Tikrit that it speaks for them; without fixing the political problems that helped lead to ISIS’s rise, the same thing could very well happen again.

Here’s the good news about the Tikrit operation: ISIS was defeated in about a month, in a place where Iraqi forces had previously tried and failed to dislodge ISIS several times. Moreover, Tikrit matters. As the AP points out, the city is located on a highway the Iraqi army wants to use in its push towards Mosul, Iraq’s second-largest city and the crown jewel of ISIS’s Iraqi holdings.

So in one sense, the significance of the Tikrit victory is obvious: it sets the stage for the eventual push to liberate Mosul. But there’s a deeper point: the victory shows that ISIS forces are vulnerable to direct attacks on their territory.

ISIS’s current strategy depends on taking, holding, and governing territory. Its recruiting message and, really, its entire political project is staked on one theory: they are the true revival of the early Islamic caliphate, destined not only to maintain and expand their theocratic state but maybe even to bring on the apocalypse.

“When they declared the caliphate, their legitimacy came to rest on the continuing viability of their state,” Daveed Gartenstein-Ross, a senior fellow at the Foundation for the Defense of Democracies, told me in October.

Tikrit shows that this project may be in jeopardy, at least in Iraq. ISIS’s initial sweep through northern Iraq relied on swift, massed assaults against unprepared Iraqi troops. US-led airstrikes have seriously disrupted ISIS’s ability to use these tactics, and the group has been slowly but steadily losing territory in Iraq for months. When it’s forced into battles with the Iraqi security forces (ISF) and Shia militias, ISIS is very vulnerable.

“Daesh [ISIS] fails to defend successfully in almost every case in Iraq: determined attacks dislodge Daesh defenses, often within hours or days,” Michael Knights, the Lafer fellow at the Washington Institute for Near East Policy, explains. “Daesh numbers are too small, even in small urban pockets of Tikrit, to fully exclude attackers. They can’t maintain firm front lines.”

One other piece of good news: the Tikrit victory wasn’t just at the hands of the powerful nongovernment militias who have played a key role in helping beat back ISIS. That would have indicated serious weakness on the Iraqi government’s part. Shia militias took the lead in the initial fighting, but their push was eventually halted. The ISF and Iraqi police, backed by US airstrikes, picked up the slack and ultimately took the lead role in clearing the city center.

The push also involved Sunni fighters — and that’s important because ISIS’s propaganda has portrayed the advancing Shia militias as on a mission to crush Sunnis. The militias are hyper-sectarian in nature, and that poses a worrying threat to Iraq’s long-term stability. But in this case, at least, they have shown locals they are capable of fighting alongside Sunnis to liberate ISIS territory.

All of this explains why many Iraq observers think it’s just a matter of time before ISIS no longer controls much of the country.

ISIS “will lose its battle to hold territory in Iraq. It may well take one to two years to reduce their defenses in cities like Mosul, Tikrit, and Fallujah, but the ultimate outcome is no longer in serious doubt,” Douglas Ollivant, National Security Council director for Iraq from 2008 to 2009 and current managing partner at Mantid International, wrote in February.

“It’s not if the Iraqi army can liberate Mosul — it’s when, and at what cost,” Knights told me around the same time.

But liberating territory from bad rulers is only the first part of the battle — as we’ve seen before in Iraq.

For one thing, Iraqi security forces need to take aggressive action to secure Tikrit. ISIS has peppered the area with improvised explosive devices. And there’s still a real risk that the Shia militias, acting alone, could massacre local Sunnis and attempt to ethnically cleanse the area.

To make matters worse, ISIS fighters have a habit of simply returning to areas previously under control if the remaining Iraqi forces aren’t strong enough to keep them out.

But there’s a deeper problem. If Iraq wants to keep Tikrit and other territory free of ISIS and other insurgents in the long run, it needs to get a handle on the political problems that gave rise to ISIS in the first place.

Most Iraqi Sunnis do not share ISIS’s vicious, theocratic interpretation of Islam. Much of the group’s tacit political support in areas they hold comes from a sense among the Sunnis that the Shia-controlled Iraqi government will never fairly represent their interests.

Former prime minister Nouri al-Maliki, a Shia Muslim in power from 2006 to 2014, is widely seen as having stirred up Sunni grievances — he cracked down brutally on peaceful Sunni demonstrators, for example. Other grievances are less legitimate, like the false but widespread Sunni belief that they are actually a majority in Iraq and thus deserve to control the government.

So long as enough Sunni Iraqis believe no Shia-led government could treat them fairly, insurgents will always have enough popular support to challenge the central government. Even if ISIS is no longer capable of controlling and governing territory in Iraq, it or a successor group could capitalize on this anger to mount a devastating insurgency.

“If the entire concept of a non-Sunni controlled regime remains illegitimate to a sizeable portion of the Sunni population (and, not incidentally, to other Sunni governments in the region), and if this population is therefore willing to accept any allies — ISIL included — to overthrow this regime, then only the most authoritarian measures can be adopted with regard to this population to hold the state together,” Ollivant warns.

So the way that Prime Minister Abadi handles post-liberation Tikrit isn’t just about immediate challenges like making bomb-strewn lands safe to walk across. It’s a major opportunity to start convincing Sunni strongholds like Tikrit that they have a place in a united Iraq.