Near miss for Etihad, Emirates flights in Mumbai airspace 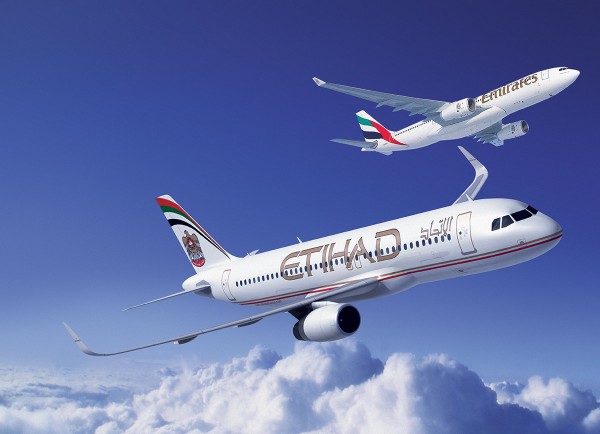 Jetliners from the United Arab Emirates’ two main airlines avoided a possible midair collision after they got too close to each other earlier this week.

The incident happened Sunday as passenger planes from Dubai-based Emirates and Abu Dhabi-based Etihad Airways were traveling in opposite directions between the Gulf federation and the island nation of Seychelles.

Both carriers have recently rerouted flights to the archipelago nation to avoid Yemeni airspace due to fighting there.

It said it informed authorities of the incident and later filed an air safety report that will be forwarded to investigators in the Indian city.

“We will be cooperating fully with Mumbai Air Traffic Control in the subsequent investigation,” the carrier said in a statement.

Both it and Etihad said that passenger safety was not compromised.

Neither carrier would say how close the two planes came to each other, though they were close enough that an onboard crash warning system issued what is known as a “resolution advisory,” according to an official at one of the airlines, who was not authorized to speak publicly.

That level of alert, more serious than a broader “traffic advisory,” tells pilots to take urgent action such as climbing or descending to avoid a possible collision.

“There was an error made somewhere along the way,” either by air traffic control, the crew or both, said Patrick Smith, a commercial airline pilot and author of “Cockpit Confidential.”

Smith said receiving a resolution advisory is rare but not unheard of. “This equipment is there to prevent a near miss,” he said.

Etihad said the traffic collision avoidance system onboard the Airbus A320 from Abu Dhabi “ensured that safe vertical separation of both aircraft was maintained at all times.”

Emirates and Etihad have both grown rapidly in recent years, enticing long-haul transit passengers through their Gulf hubs aboard relatively young aircraft.

Emirates is owned by the government of Mideast commercial hub Dubai, while Etihad is controlled by the oil-rich Emirati capital, Abu Dhabi.

They each operate multiple flights weekly to Seychelles, a tropical tourism destination that has built close ties to the Emirates.

The Emirates’ General Civil Aviation Authority said the circumstances and cause of the incident are not clear, and noted it has mandated “the latest technology” onboard aircraft it certifies. It said it has reached out to Indian regulators to help in the investigation but has received no response so far.

“GCAA is following up on the investigation process and is committed to ensure a safe and secure civil aviation system,” it said.