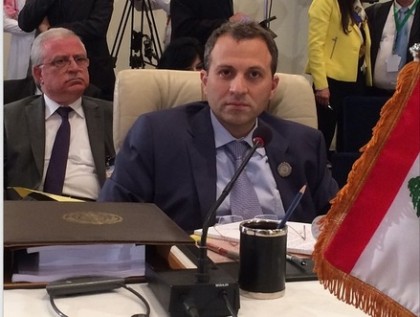 Saudi Arabian and Egyptian officials were reportedly “annoyed” with Foreign Minister Jebran Bassil’s attitude at the Arab League summit over his insistence that Lebanon is committed to its policy of disassociation from regional disputes, al-Mustaqbal daily reported on Sunday.

The officials were bothered that the policy did not synchronize with the Arab consensus on backing a coalition to combat regional threats.

They were reportedly asked to await Prime Minister Tammam Salam’s statement at the Arab League summit ahead of jumping to conclusions over Lebanon’s official stance.

Salam had declared during his speech on Saturday night that Lebanon is “keen on the joint Arab interest.”

He also voiced his “complete support” to any Arab position that preserves the sovereignty of Yemen.

The premier added however that Lebanon should “be kept neutral over regional conflicts.”

The 22 members of the Arab League met in Egypt’s Sharm al-Sheikh for a summit overshadowed by the Saudi-led offensive against Yemen’s Iran-backed Houthi rebels to discuss a joint-Arab military force to confront “terrorist groups”.

Hezbollah Secretary General Hassan Nasrallah blasted Saudi Arabia on Friday over its intervention in Yemen, saying the Sunni kingdom has abandoned the Palestinians and does not care to oppose Israel.

“They have money, so why do the Palestinian people live in poverty?” He said,  adding ” Iran has answered the Palestinians’ call for help and gave all the financial, military, and diplomatic support.” Nasrallah said.

Lebanese rivals adopted in 2012 during a national dialogue session the Baabda Declaration, which calls for Lebanon to distance itself from regional crises, most notably the one in Syria.

But the Iranian backed Hezbollah militant group reneged on the declaration and sent on orders by Iran tens of thousands of its fighters to Syria to help the regime of embattled president Bashar al Assad in its fight against the mostly Sunni rebels .

Bassil is the son-in-law of MP Michel Aoun , a stanch ally of Iran, Syria and Hezbollah . Aoun says he supports Hezbollah intervention in Syria and earlier this month he assured a pro Hezbollah newspaper that he was an integral part of the so called axis of resistance (Iran-Syria-Hezbollah).