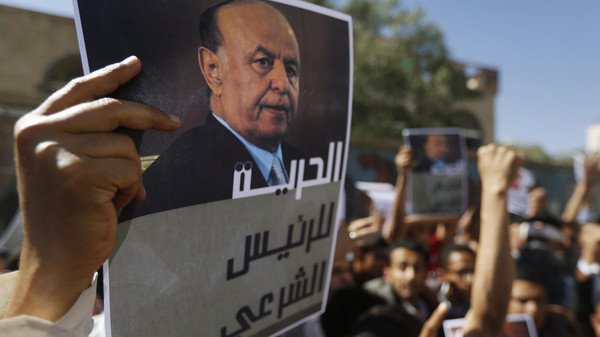 A protester holds up a poster of Yemen’s former president Abd-Rabbu Mansour Hadi during an anti-Houthi demonstration in Sana’a. 5 Arabian Gulf states including Saudi Arabia said they decided to intervene in Yemen in response to a request by Mr. Hadi for intervention as he came under pressure from the Houthis. Khaled Abdullah Ali Al Mahdi/Reuters
Share:

Iran and Saudi Arabia ratcheted up their rhetorical confrontation on Thursday over military intervention in Yemen, adding fuel to a regional rivalry with sectarian overtones at a delicate time for Iranian nuclear talks with six global powers including the U.S.

The Houthis, who are thought to receive support from the Shiite-majority Iran, had earlier drawn their forces close to the southern stronghold where Yemeni President Abed Rabbo Mansour Hadi had been hiding out. Mr. Hadi, who has the support of Saudi Arabia and the U.S., fled the port city of Aden by boat late Wednesday.

In a joint statement on Thursday, five Arabian Gulf states including Saudi Arabia said they decided to intervene in Yemen in response to a request by Mr. Hadi for intervention as he came under pressure from the Houthis. Their response was meant to protect Yemen from Houthi aggression, “which was and still is a tool in the hands of foreign powers,” the statement said, an apparent reference to Iranian influence in the country.

“It is necessary that military actions end as quickly as possible and talks start to find solution,” Iranian Foreign Minister Javad Zarif told the state-owned IRINN news channel. “We believe these types of military actions can only escalate tension in the region and they will give no advantage to any country that involves itself in these actions.”

The Saudi strikes hit Houthi targets around the capital, San’a, and a southern military base. They followed a week of military advances by the Houthis, who have a power base in northern Yemen, toward Mr. Hadi in Aden.

The Houthis, who represent the Zaidi offshoot of Shiite Islam, descended into San’a last year and took power in the capital in February, forcing Mr. Hadi’s flight to Aden. Their militants took the southern city of Taiz on Tuesday, followed by a key military base in the southern Lahij province, which borders Aden, on Wednesday. Aden’s international airport also fell into Houthi hands.

The intervention by Saudi Arabia and its Gulf allies comes as the U.S. and five other world powers try to negotiate a nuclear deal with Iran that would roll back some international sanctions in exchange for limits on uranium enrichment.

While it is unclear how a confrontation with Saudi Arabia over Yemen will affect these talks, Iranian officials targeted the U.S. over its role in the operations on Thursday. The U.S. considers Mr. Hadi to be Yemen’s legitimate president and has pledged logistical and intelligence support to Saudi and its Gulf allies in their military campaign.

Alaeddin Boroujerdi, the head of the Iranian Parliament’s national security and foreign policy committees and one of the most hard-line figures in the Iranian regime, said in an interview on Iranian state television that Gulf countries received the “green light” from Washington to interfere in Yemen.

“The U.S. is in the lead in fomenting strife in the region,” he said.

Complicating Middle Eastern policy relationships further, the U.S. recently started aiding Iran-backed Shiite militias and Iraqi army forces as part of their push to dislodge Islamic State extremists who took over the Iraqi city of Tikrit last year. The U.S. on Wednesday began carrying out airstrikes to support the operation.

Hamid Reza Dehghani, the head of Middle East studies at Iran’s foreign ministry, said Thursday that intervention in Yemen benefited only the U.S., Israel and terrorist groups like al Qaeda.

Al Qaeda in the Arabian Peninsula, one of the world’s most potent terror groups, is based in Yemen and had been the target of U.S. counterterrorism operations there until all military personnel were evacuated recently.

“The smoke of this situation will harm the eyes of the people in the region,” Mr. Dehghani said.

As Saudi Arabia intervenes, Egypt is also coordinating participation in the Yemeni campaign by its air force and navy, and could send a ground force if necessary, the country’s foreign ministry said in a statement. Jordan, Sudan, Morocco and Pakistan have also “declared their willingness to participate” in the operations, which Saudi Arabia has dubbed “Decisive Storm,” according to a statement by Saudi Arabia’s official SPA news agency.

“These attacks will expand terrorism and accelerate insecurity all over the region,” Ms. Afkham was quoted as saying by the official IRNA news agency. “This is a dangerous move and against international responsibilities and respect for national sovereignty of countries.”