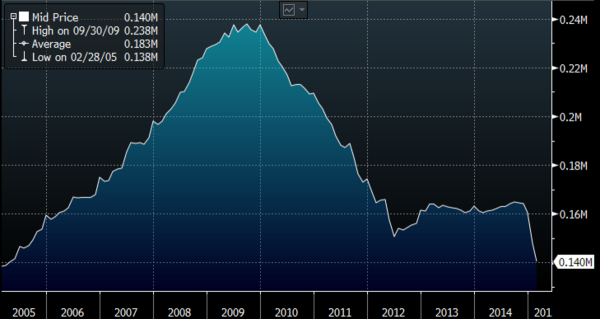 Greek bank deposits plunged to their lowest level in 10 years in February as a political standoff between the government in Athens and the country’s creditors raised the prospect of a possible euro exit.

The deposits of households and businesses fell 5 percent in February to 140.5 billion euros ($154 billion), their lowest level since March 2005, according to Bank of Greece data released on Thursday. Greeks have pulled about 23.8 billion euros from banking system in the past three months, 15 percent of the total deposit base.

Greek lenders are depending on Emergency Liquidity Assistance controlled by the European Central Bank to stay afloat as depositors flee. The country’s creditors have given Prime Minister Alexis Tsipras, elected in January on a platform to end austerity, a Monday deadline to present enough details of a new economic plan to convince them to release more bailout funds.

“What we’re likely to see is over the course of the next few weeks is still the drip-feed of liquidity,” said Janet Henry, chief European economist at HSBC Holdings Plc in London, in a Bloomberg TV interview. “We could get more of the ELA, that’s essential to keep the banking system afloat; they could give Greece a bit of leeway to announce its reform proposals, give it some easy wins that it can implement in the next week or two.”

The European Central Bank Governing Council on Wednesday made more than 1 billion euros of ELA available to Greek lenders, its latest move to defer a financial meltdown. That raised the limit to just over 71 billion euros.

An index of Greek bank shares fell 8.6 percent at 2.18 p.m. in Athens on Thursday, while the benchmark Athens Stock Exchange index fell 3.4 percent.

Bank of Greece governor Yannis Stournaras, who is also an ECB Governing Council member, acknowledged at a speech in London on Wednesday that the crisis has unsettled the banking system, saying that there has been “some outflow of deposits due to uncertainty.”

While officials including Stournaras and Finance Minister Yanis Varoufakis said bank system deposits stabilized after a Feb. 20 agreement that extended the country’s loan accord to the end of June, outflows picked up again last week, when about 1.5 billion euros left the system.

While ECB policy makers are ensuring lenders have sufficient liquidity to operate, the central bank’s supervisory arm is also making it difficult for banks to channel that funding to the government, banning them from increasing their holdings of short-term public debt. The increase on Wednesday leaves Greek banks with about 3 billion euros to supply the country’s ATMs.

Greece began making 1.5 billion euros of monthly pension and salary payments on Thursday and the government is already yanking cash from public companies to cover its obligations. European officials say Tsipras could run out of funds within weeks.

Greece needs to act faster so its actions can be more effective, Jeroen Dijsselbloem, who heads the euro-area finance ministers’ group, said in Rotterdam on Wednesday. A conference call of finance ministry deputies on Wednesday gave the country the Monday deadline to present reform details, before more cash could be released.

“The main problem is the same in every country in Europe: getting things done,” Dijsselbloem said.