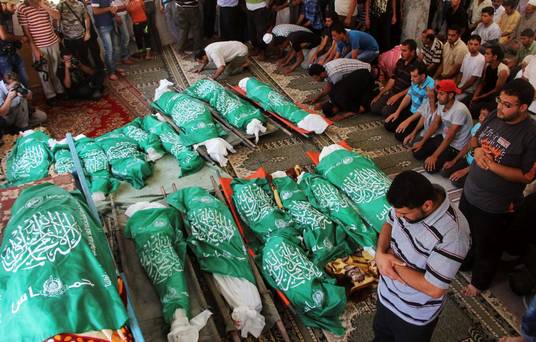 Palestinians pray over the bodies of 17 members of the Abu Jamea family, killed by an Israeli strike at their house, during their funeral at the main mosque in Khan Younis, in the southern Gaza Strip, Monday, July 21, 2014. (AP Photo/Hatem Ali)
Share:
A report by a special UN investigator said that Israel “deliberately” targeted civilian homes during last summer’s attack on Gaza. The report will be presented Monday to the United Nations Human Rights Council (UNHCR) in Geneva by special rapporteur Makarim Wibisono of Indonesia.

The report will form part of the basis for a UNHRC debate Monday on alleged Israeli violations of human rights. The Council will also be briefed on the findings of a UN-appointed Commission of Inquiry into the Gaza war, headed by former New York Supreme Court judge Mary McGowan Davis. The commission had been due to present its final report at the session, but following the resignation of its previous head, Canadian law professor William Schabas, it asked for a delay until June, i24 said.

In his first report to the UNHRC, Wibisono wrote that “most victims were families killed in missile strikes on their own homes, usually at night.

“In the non-exhaustive list of cases brought to the attention of the Special Rapporteur, almost all of the families lost one or more infants or children.” The content of his report was reported Monday by The Jerusalem Post.

Israel estimates that some 2,100 Palestinians were killed during the Gaza war, of which about half were Hamas or Islamic Jihad fighters.

The UN’s casualty count, Wibisono said, listed 2,256 Palestinian fatalities, of which 1,563 were civilians, including 538 children. “On principle,” he said, “ten children died every day over a period of 50 days” during the conflict.

This casualty count is more than the two previous offensives against Gaza, he wrote, adding that it is disproportionately higher than the 66 Israeli soldiers and five civilians who died during the war.

The “stark disparity in casualty figures on the two sides, he said, reflects the skewered balance of power and disproportionate cost borne by Palestinian civilians.

Wibisono noted that Israel had explained that it was responding to indiscriminate rocket fire by Palestinian armed groups from homes and hospitals when it attacked civilian areas. However, personal testimony, satellite imagery and the high civilian death count raised questions as to whether Israel adhered to the “international principles of distinction, proportionality and precautions.”

Israel and the U.S, however, have withdrawn from the UNHRC two yeast ago as a response to criticism of colonial activities in the occupied Palestinian territories, in addition to the U.S halt of financial support to the counsel because of these condemnations.