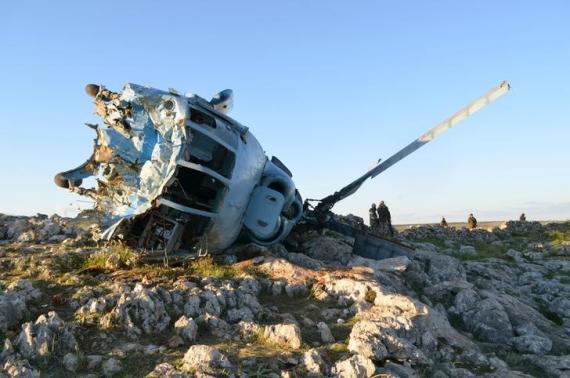 Nusra Front fighters inspect a helicopter that belongs to forces loyal to Syria’s President Bashar Al-Assad after it crashed in Jabal al-Zawiya in the southern countryside of Idlib March 22, 2015. CREDIT: REUTERS/ABED KONTAR
Share:

A Syrian military helicopter crashed in northwestern Syria on Sunday and at least four of its crew were captured by rebels, according to a monitoring group.

Video footage on social media showed a helicopter crashing in the distance. Photographs posted showed one of the crew apparently executed on the spot and an injured pilot taken by rebels from the wreckage.

The British-based Syrian Observatory for Human Rights, which tracks violence in the country, said at least four of the six crew were taken hostage by the al Qaeda offshoot, the Nusra Front.

Al Qaeda’s Syrian branch posted a picture of one of the pilots sitting on a mattress on the floor of a room under a hung banner of the group. A video released on social media showed another captured pilot being cursed by a Nusra cleric who blamed him for dropping bombs to kill and maim civilians.

Syrian television said the plane encountered a technical problem and was forced to make an emergency landing and not downed as claimed by rebels.