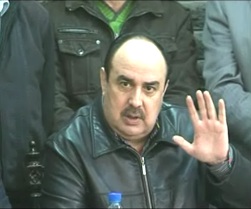 A report surfaced on Thursday evening by al Sharq al Awsat newspaper , but has not yet been confirmed by any Syrian official announced the death of Maj. Gen. Rustom Ghazali,the former head of the Political Security Division and one of the main pillars of President Bashar al-Assad’s regime . He was considered part of Assad’s inner circle.

Ghazali was the most dreaded Syrian official during the military occupation of Lebanon and one of those suspects involved in the 2005 assassination of former Lebanese Prime Minister Rafik Hariri.

According to the report Ghazali died in a hospital in Damascus, to which he was admitted under mysterious circumstances.

The former spokesman for the Free Army Louay Mokdad said the medical report indicated that Ghazali was either infected by a deadly bacteria or deliberately poisoned or the collapse of the vital functions of his body, was the result of the severe beatings earlier this year.

Ghazali was reportedly admitted to Al Shami hospital after news of a sharp disagreement between him and pro Iranian Maj. Gen. Rafiq Shehadeh, head of the Military Intelligence Division as a result of which Ghazali was severely beaten by Shehadeh’s bodyguards .

Ghazali was also the regime’s coordinator with Hezbollah, which has been helping Assad against the rebels.

In September 2005, Ghazali was questioned on the Hariri assassination by United Nations investigator Detlev Mehlis. In December 2005, former Syrian vice president Abdul Halim Khaddam accused Ghazali of political corruption, dictatorial rule in Lebanon and of threatening Hariri prior to his death. After the withdrawal from Lebanon little was heard of him. However, at the beginning of the protests in Daraa, Ghazali was sent by Bashar al-Assad to assure locals of the president’s good intentions. In May 2011, the European Union said Ghazali was head of military intelligence in Damascus countryside (Reef Dimashq) governorate, which borders Daraa governorate, and was involved in the repression of dissent in the region.

On 24 July 2012, Ghazali was appointed chief of political security.

Ghazali who was a Sunni from the Daraa area was allegedly opposed to the prominent role played by Hezbollah and other foreign fighters (in particular Iranians) in the Syrian Civil War. This was reportedly the reason behind his disagreement with Shehadeh in early 2015.