Analysis: How Iran Is Taking Over the Middle East 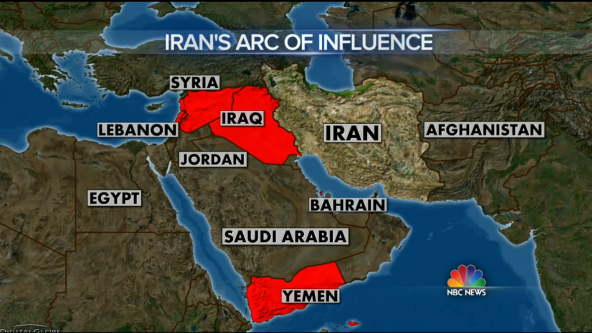 By: Riyadh Mohammed
Two weeks ago, Israeli Prime Minister Benjamin Netanyahu urged Congress to ensure the U.S. would not be soft on Iran. Then, 47 Republican senators wrote to the Iranian leadership to tell them that Congress will need to approve any deal Obama may make with Tehran over its nuclear program. Finally, we had a senior advisor to the Iranian president saying that Iran has become a Middle Eastern empire whose capital is Baghdad.

As U.S. politicians argue about how best to squelch Iran’s nuclear ambitions, the regime in Tehran is exerting itself in other ways, winning powerful influence in neighboring Iraq and across the Middle East.

In the contest for regional dominance with the Sunni kingdom of Saudi Arabia, Iran’s Shiites have extended their reach and created what has been called an “arc of power” or a Shia crescent. The Iranian sphere of power now stretches across Iraq, where Iran has joined in the fighting to beat back ISIS, to Syria, where the government in Tehran has worked to keep President Bashar al-Assad in power throughout the country’s four-year civil war. It stretches to Lebanon, where the Iranian-backed Hezbollah is the unquestioned power and is pushing to enter the political mainstream. And it has spread to Yemen, where Houthi rebels, a Zaidi Shia group, recently took control of the government.

When you look at the map of the Middle East, you don’t need to be an expert in geopolitics to realize that Iran’s influence has increased over the last few years while the US’s role has diminished. The main reason is what politicians call “war fatigue.” Americans are tired of soldiers dying or being maimed for life, and suffering the long-term effects of PTSD. And the country has little patience for a long and expensive war. But that was before ISIS started kidnapping Americans and chopping off their heads, burning people alive and destroying ancient artifacts that can never be recovered.

Americans like to see the world in simple terms—good guys and bad guys. South Korea—good, North Korea—bad. But in the Middle East, there are not white hats and black hats—just 100 shades of grey.

In Iraq, the U.S. has competed with Iran since the Saddam Hussein era. The U.S. is the super international power while Iran is the dominant regional one in the Persian Gulf. One crucial date for the Iranian influence in Iraq was the country’s first general election in January 2005, which brought to power a Shiite coalition that, along with the Kurds, also drafted the Iraqi constitution. Ever since, Iran’s Ambassador to Baghdad was no less important than his American counterpart. When U.S. forces left Iraq in December 2011, the Iranian influence in Iraq overshadowed the American one.

When President Obama declined to help Iraq, an ally with a democratically elected — though corrupt — government as ISIS was marching to Baghdad in June 2014, it was another turning point for Iran. Obama said, “The United States will not be the Air Force of the Iraqi Shiites.” At that critical moment, no country was willing to help other than Iran. It sent advisors and weapons that enabled Iraq to breathe and to prevent the fall of Baghdad. In the current offensive on Tikrit, 20,000 Shiite militiamen are mobilized. All of them are supported in one way or another by Iran. Only 3,000 Iraqi soldiers and policemen are accompanying them, trained by the U.S.

The Iraqi Shiites were lost to Iran a long time before Obama took office. President Ronald Reagan supported Saddam Hussein during the 1980s in his war against Iran and the Shiite Iraqis. In 1991, President George H.W. Bush urged the Iraqis to rise up against Saddam Hussein — a Sunni — during the Gulf War. When the Shiites and Kurds did, the U.S. stood idle while Hussein’s forces slaughtered them by the tens of thousands. At that time, it was said that a massacre with Saddam in power is better than an Iraq with Iranian-backed Shiites in power. The result was to align the Iraqi Shiites with Iran.

The Syria-Iran Connection
For three decades, Syria was Iran’s best friend in the Middle East. But at the onset of the Syrian revolution four years ago, the Assad regime began killing its own people. As the horrific death toll began to climb, Syrians, Arabs and Muslims, as well as some Americans–all wanted the U.S. to intervene. In 2012, Senator John McCain (R-AZ) called for the U.S. to go to war and establish a safe haven for the Syrian rebels and a no fly zone over Syria. But the chairman of the Joint Chiefs of Staff, General Martin Dempsey, pushed back, claiming military action would cost US taxpayers billions.

When General David Petraeus, then director of the CIA, and Secretary of State Hillary Clinton suggested a plan to arm the Syrian rebels in 2012, Obama rejected it. Even when Assad crossed the red line Obama had drawn by gassing his own people several times in 2013, Obama simply negotiated a deal with Assad to hand over his arsenal of chemical weapons. That was no help to the 200,000 Syrians who were killed by Assad’s conventional weapons.

How the Door Opened Wide to Terrorism

The inability to confront Assad in any meaningful way opened the door for al-Qaeda and ISIS, the two terror groups, to try to build their own emirates in Syria. It also made the Assad regime more dependent on Iran and Hezbollah, Iran’s strong ally in Lebanon, to curb the al-Qaeda and ISIS offensives. While Syria was a former ally of Iran, today, it is more or less its proxy. Hezbollah has similarly shifted from a Shiite force supported by Tehran into Iran’s surrogate.

When his people finally rose up against him in 2011 as part of the Arab Spring, the corrupt dictator Ali Abdullah Salih killed his nation’s youth on the streets for almost a year until a deal was arranged so he could step down without fear of prosecution. In his last decade in power, Salih launched a war against the Houthis, a rebel movement of the Zaidi Shiites, who make up a little less than half of Yemen’s population. Iran supported them, as it did the Iraqi and Lebanese Shiites. When Salih stepped down, his successor was his respected and reform-minded vice president.

Shielded by his immunity deal, Salih conspired with the Houthis to destabilize his successor’s government, and while the world was watching helplessly, the Houthis captured the capital in September 2014. A few months later they forced the new president to resign and then flee to Adin in the south. Overnight, a leader who was a legitimate ally in the war against terrorism was toppled by a militia supported by Iran — all while the Obama administration was almost completely silent.

Some ask, “What could Obama have done differently? He is not in charge of the entire world, after all.”

Obama could have done a lot.

In Iraq, he could have ensured a small force would be present instead of authorizing a total withdrawal.
He could have pushed more to curb Iraqi government corruption and the authoritative style of former Prime Minister Nouri al-Maliki.
He could have done more to arm the Iraqi Special Forces while ISIS was surging.
He could have supported the Iraqis earlier when Baghdad’s fate was in question in June 2014.
In Syria, Obama could have intervened earlier by air or by threatening to use the Air Force against the Assad regime.
He could have also established a no fly zone or a safe haven for the rebels.
He could have supplied the moderate rebels with arms, as he was advised to do in 2012.
In Yemen, Obama could have done more to support the new president and prevent the collapse of the capital to the Houthis.
He could have used the U.S. Air Force or threatened to use it.
He could have sent an urgent arms shipment to the functional parts of the Yemeni military.
He could have pressured Iran more to stop the rebels.
Iran’s nuclear program is the main issue over which Israel and Saudi Arabia have expressed concerns. In 1981, the Israeli air force attacked the Iraqi nuclear plant near Baghdad. The attack bought Israel about a decade before Iraq was again close to making a bomb. Israel wanted to do the same with Iran in 2008. President George W. Bush refused to cooperate with that scenario. Saudi Arabia tried to persuade the U.S. to bomb Iran in the same year. Bush declined again.

What Israel, its lobby in the U.S. and the anti-Iranian Arab states are not paying attention to is that Iran will eventually acquire the ability to produce a nuclear bomb. Iran is three times larger than Iraq in size and population. A surprise attack on Iran’s nuclear sites is no guarantee to success and will definitely provoke an angry Iranian reaction. Add to that Obama’s refusal to engage in an action that may lead to a war with Iran. The current sanctions and negotiation course is not only the best plan the US has, but it is probably the only one that could work. The administration could try to strengthen the pragmatic elements of the Iranian regime and convince them that even if they can produce a nuclear weapon, it is better not to do so.

It is also necessary to review the Iranian presence in the Middle East without the sectarian glasses the Saudis are wearing and without being paranoid, as the Israelis are now. Iran is one of the three big nations in the Middle East, along with Egypt and Turkey. When comparing what Iran is doing in Iraq and Syria with what the US’s ally, Saudi Arabia, is doing, I doubt that Americans would be pleased with the Saudis. Not everything Iran does is so bad. Iran’s overall role in helping to defeat ISIS in Iraq will lead to a greater Iranian influence. That could be called an Iranian control of Iraq, but it is also far less harmful than an ISIS-controlled Iraq.

Iran’s influence in the Middle East is greater today than it was six years ago. This is mostly due to the Obama administration’s disengagement with that region. It is possible to undo that. If Obama started engaging in the Middle East’s issues, Iran’s emerging era could end before it really takes hold.