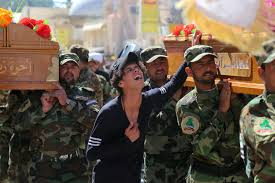 Mourners chant slogans against the Islamic State during the funeral procession Wednesday, March 11, 2015, in Najaf of three members of a Shiite group, Asaib Ahl al-Haq, or League of the Righteous, who were killed while fighting the militants in Tikrit. (AP Photo/Jaber al-Helo) (Jaber al-Helo/AP)
Share:

The Iran- led   operation to retake the city of Tikrit has stalled as the Shiite militia and Iraqi  troops suffer heavy casualties at the hands of Islamic State militants, raising concerns over whether the pro-government fighters are ready for major offensives.

After two days of little activity on the battlefield, Iraq’s interior minister, Mohammed al-Ghabban, confirmed Monday that the offensive has “temporarily stopped.” The steady flow of caskets arriving in Iraq’s Shiite holy city of Najaf suggests a reason for the pause; cemetery workers say as many as 60 war dead have been arriving each day.

Since last week, Iraqi forces have hemmed in the Sunni militants in Tikrit, claiming control of the majority of the former Islamic State stronghold. But the operation has come at a cost, with soldiers saying the fight has been tougher than expected. As the momentum has slowed, some Iraqi officials have begun to publicly call for U.S.-led air support.

While Iraqi officials still express confidence that they can retake the city, the stuttering offensive does not bode well for the more complex battles for the city of Mosul or militant-held areas of Anbar that were expected to begin in coming months.

“It’s a furious fight, harder than we thought,” said Taher Sabah, a 25-year-old militiaman with the Shiite Badr Organization, who arrived to lay his father to rest in Najaf on Sunday after he was killed near Tikrit the night before.

The Iraqi government is not providing casualty figures from the battle. But Najaf’s Wadi al-Salaam cemetery, the largest in the world, is the final resting place for the majority of Iraq’s Shiites and, given the largely Shiite makeup of the country’s security forces, a large number of the pro-government battlefield casualties.

As dusk fell Sunday evening at Najaf’s Imam Ali shrine, where the dead are taken before being buried, four caskets — shrouded in flags to signal that they contained the bodies of fighters who had made the ultimate sacrifice for their country — arrived within 20 minutes.

Sabah’s father was shot dead with two of his fellow combatants as they tried to clear a building in the town of Alam near Tikrit, not realizing that 17 Islamic State militants were holed up inside, his family said.

Wearing his military fatigues and with a flag draped over his shoulders, Sabah struggled along with his relatives to carry the casket through the maze of graves at the cemetery. They lifted it over tombs from Iraq’s previous conflicts — the dead from the eight-year war with Iran, those killed fighting the U.S. occupation and the victims of Iraq’s sectarian bloodletting that followed the invasion.

The cemetery’s reception office has recorded 127 battlefield deaths since the start of the Tikrit offensive at the beginning of the month. But it does not include numbers for the largest Shiite militias, the Badr Organization, Asaib Ahl al-Haq and Shiite cleric Moqtada al-Sadr’s Peace Brigades, who record their figures separately.

At the cemetery’s washing stations, where most bodies are taken to be prepared for burial, workers say the numbers are higher.

“Between all the main four washing stations, it’s now around 40 to 60 martyrs from Tikrit a day,” said one manager, Fadl al-Zubaidi. Just a smattering are from the army, he said; most victims are Shiite volunteers or from the Shiite militias who are spearheading the fight.

U.S. officials said last week that about 20,000 Shiite militia fighters have joined the battle for Tikrit, compared to fewer than 4,000 Iraqi military troops.

Zubaidi had heard numerous details about the battles from troops returning with the war dead — stories of ambushes and pro-government fighters taken captive and then burned alive. He suspects that the authorities sometimes withhold bodies.

“On the battlefield in one day, sometimes a hundred soldiers fall, but the morgue doesn’t deliver them all at once because it’s too sensitive,” he said.

Hashim Yasser, another manager, said the spike in casualties is the worst since the Islamic State launched its lightning advance across northern Iraq last June.

“We have an insight here, as to how things are progressing,” he said. “It’s not good.”

A few hundred yards away from him, Samira al-Timimi, 59, dealt only with bodies of fighters for Asaib Ahl al-Haq, one of Iraq’s more notorious Shiite militias. She said 26 of the group’s militiamen had died in Tikrit so far, including three top commanders who were killed in a suicide bombing on March 5.

Bombings and sniper fire are the most common cause of death among pro-government forces, cemetery workers say.

Despite the costs to Iraqi troops, the offensive has squeezed the Islamic State in Tikrit and pushed its fighters out of surrounding villages and towns that had been in their grip for eight months. But some officials argue that more assistance is needed for a final push into the city.

Jassim al-Jabara, head of the security committee of the Salahuddin provincial council, said he remains confident that the operation could be finished in a matter of days. But he said air support from the American-led coalition was necessary.

“We desperately need it now,” he said. “But some people are against it.”

Lt. Gen. Abdulwahab al-Saidi, head of counterterrorism forces in the province, also told Agence France-Presse that there was a need for precision strikes by the U.S.-led coalition. However, Raed al-Timimi, a spokesman for Iraq’s Defense Ministry, said the government had not made a formal request for such assistance.

In Washington, a Pentagon spokesman, Col. Steve Warren, told reporters that U.S. forces have not conducted aistrikes to support the Tikrit battle. “I won’t speculate on what we’re going to do do in the future, but [I] know for a fact that we are in, of course, very close touch” with the Iraqi government, he said.

Joining the battle would put the United States in an awkward position, with the Tikrit operation dominated by militia forces and overseen by Iranian commander Qasem Soleimani. Shiite-dominated Iran has been a key backer of the militias.

Karim al-Nouri, a spokesman for the Badr group, maintained that Iraqi forces could go it alone.

Fresh militia reinforcements started arriving Sunday, as Sadr sent his Peace Brigades to join the battle. He had frozen their activities just weeks ago, citing concerns about the negative image created by other militias accused of human rights abuses.

Ghabban said Monday that Tikrit operations would “resume soon” but that the decision would be in the hands of battlefield commanders. In the meantime, he said, the focus was on maintaining security in areas already cleared.

As Sabah waited in the fading sunlight for his father’s grave to be dug on Sunday, he said he planned to return to the battlefield as soon as possible, motivated even more by his father’s death. When he entered the building where his father was killed, he “took revenge” by killing one Islamic State militant, he said.

“When I saw my father lying there, I couldn’t continue,” he said. “But now, as soon as the funeral is over, I’ll go back. We’ll keep going no matter what it takes.”