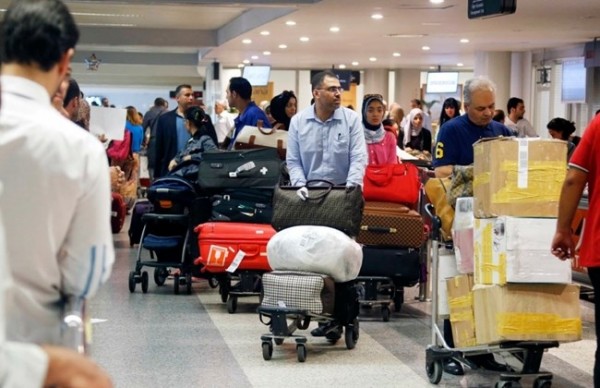 The United Arab Emirates  decided to deport  seventy Lebanese  Citizens  , mostly  Shiites and reportedly because of security reasons .Four  of the   expelled citizens  arrived  from Abu Dhabi at Beirut’s  International airport at 11 p.m.  Saturday ,  and the rest  are expected to arrive on  Sunday.

Hassan al-Ayan, the head of the  committee representing  the Lebanese citizens who were expelled from the country was quoted as saying at the airport :

“A much larger group is set to arrive today ,”  stressing that “those arriving were still in a state of shock”.

Three flights are scheduled to arrive  to Beirut from the UAE on  Sunday, with sources at Beirut’s Airport expecting a  large number of deportees to be on board.

The sources said that the majority of deportees were coming  from Abu Dhabi.

The deportees are reportedly  keeping a low profile as not to attract any unwanted attention.

Al-Ayan reportedly wasn’t capable of selling his car, furniture or other belongings due to the 48 hour time notice  he was given to leave.

Al-Ayan said that UAE authorities were unwavering when he requested an extension to the two day deadline, despite the fact that it was impossible for him settle any of his affairs by that time.

This is the third time in 6 years that UAE decides to  deport  Lebanese citizens..

The UAE Authorities took the decision to deport a number of Lebanese from the country due to the suspicious activity they were involved in,  the Kuwaiti daily al-Seyassah  reported  on Sunday.

Parliamentary sources from the March 14 camp told the daily that the authorities had issued dozens of warnings to the deported people over the years to cease their suspicious actions.

These warnings fell on deaf ears and the authorities had no choice but to deport them, they added.

Others were involved in political propaganda for the party and attempts to recruit new members to it, adding that some of the deported people are not Shiites, but offered cover for them.

Arab diplomatic sources told al-Seyassah  that there are fears that other Gulf states would follow the example of the UAE and deport Lebanese families “linked to Hezbollah and Iran’s expansionist ambitions in the region.”

Prime Minister Tammam Salam who has been  attending the Egyptian Economic Conferece in Sharm el Sheikh met the vice president of the United Arab Emirates and Dubai’s ruler, Sheikh Mohammed bin Rashed al-Maktoum on Saturday to discuss the recent decision to deport the  Lebanese citizens .

“The UAE has neither a policy nor an intention to target Lebanese residents.” Salam quoted the Dubai ruler  as saying

Hezbollah, which is backed by Iran, has been at odds with the Gulf states, specially since the crisis in Syria started 4 years ago.