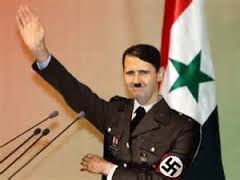 It seems John Kerry is ready to negotiate with Adolf Hitler. Two years ago, when he appeared on NBC‘s “Meet the Press,” the Secretary of State put Syrian  Dictator President Bashar al-Assad in the same category as the ruthless dictators Hitler and Saddam Hussein when he was asked about Syria’s reported use of chemical weapons.

“Bashar al-Assad now joins the list of Adolf Hitler and Saddam Hussein who’ve used these weapons in a time of war. This is of great consequence to Israel, to Jordan, to Turkey, to the region, and to all of us who care about enforcing the international norm with respect to chemical weapons.”

Kerry explained how test samples sent to the United States more or less proved that Syria had used sarin nerve gas on its own people outside Damascus, clearly violating The Geneva Protocol, which has been in place since 1925.

Today, Kerry has either forgotten his own condemnations of Assad or he’s softened his attitude toward him, for today he announced he’s willing to work with the Syrian dictator.

“We have to negotiate in the end,” Kerry said. “And what we’re pushing for is to get him to come and do that, and it may require that there be increased pressure on him of various kinds in order to do that. We’ve made it very clear to people that we are looking at increased steps that can help bring about that pressure.”

With these comments, Kerry shares his boss’s short term memory when it comes to dealing with foreign nations. Remember when President Obama warned Syria that any use of chemical weapons would cross his red line and force the United States to deploy military forces their way?

Apparently neither does he.

Syria’s alleged use of poison gas killed nearly 1,500 civilians. Does that sound like a nation that we should be running to for negotiations?