iWatch: Could Apple soon be worth $1tn 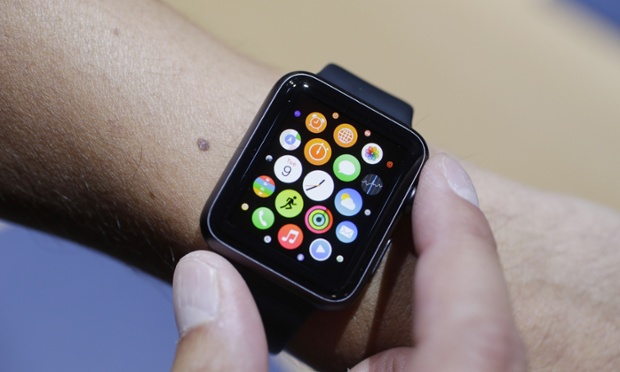 As Apple’s chief executive, Tim Cook, prepares to reveal the few details not yet known about the Apple Watch tomorrow – the price, the battery life, when it will hit the shops – some are already predicting a flop.

It will weigh the company down, they argue, and the solid gold version aimed at the very rich will tarnish a brand that promises “affordable luxury”, turning it into the preserve of rich fashionistas who wouldn’t be seen dead with last season’s $2,000 handbag – or $5,000 smartwatch.

“Apple needs a new product to reduce its reliance on one core product, the iPhone,” David Goldman, CNN’s technology editor, said in February. “It won’t find that with the Apple Watch.”

At a mooted starting price of $350, he argues, it’s pricey – but not truly beautiful, uncompelling and, in any event, likely to be updated in a year.

In fact, that $350 price tag makes it the cheapest new category Apple has ever introduced – the original iPod, in 2001, was $399. (There was the $299 Apple TV set-top box, but that was always something of an afterthought.)

But the watch has also seen an intensive PR and marketing effort, including recent lengthy interviews with head designer (and Briton) Sir Jony Ive in the New Yorker and the FT’s How To Spend It section (in which he murmurs that the watch is “clearly the most personal product we’ve ever made”), and a 12-page set of ads in the March edition of Vogue at an estimated cost of $2.2m.

It connects to an iPhone, and displays – or taps your wrist with notifications from – apps about all sorts of things (sparking a new goldrush). It’s watch-like, but more of an extension to a phone. Doubters have focused on the battery life (about a day); enthusiasts on its potential to save you pulling your phone out of your pocket for maps or train times.

The launch of the watch isn’t the first time Cook has faced doubters. In spring 2013 there were calls for his head when Apple’s market capitalisation was $366bn, far below an earlier peak of $658bn in September 2012. Now it has passed $750bn, Cook is still in place, new products are on the way, and analysts are beginning to wonder: could Apple soon be worth $1tn? And how much of a part will the new watch play in that?

Katy Huberty, an analyst at Morgan Stanley, suggests the shares could be worth $160 in a year’s time (on Friday they were at $126), which would value the company at $934bn.

“Apple has the world’s most valuable technology platform,” she argues, with customers who are loyal and willing to pay more for its products and services than users of Google’s Android phones. “A strong platform becomes a virtuous circle, as many users buy multiple devices and more software and services, which in turn attracts more developers, merchants and partners.”

Not only that, but Apple has plenty of room to expand into, she argues: its current products and services are useful for a third of most people’s day, but it could increase that to three-quarters by getting into TV and even cars. The latter, like the former, so far remains only rumour, but enough circumstantial evidence has appeared – such as hirings from a car battery company (which is suing) and word of an internal project – that analysts now think it’s only a matter of time.

“I’ve read the rumours. I can’t comment on it,” Cook said when asked about an “Apple car” last week. However Steve Jobs would deny the existence of products right up to their unveiling; I saw him laugh at the idea of a phone in 2005.

Despite the pundits, on Wall Street and in the industry it is hard to find anyone to agree that the watch could flop. James McQuivey of Forrester Research said last week that “20 million people in the US alone are inclined to buy something new from Apple, giving Apple an easy shot at converting 10 million people to buy one between the US and international markets. We stand by our initial assessment that 10m units sold by year-end is likely.” McQuivey sounds like a pessimist compared to Huberty, who forecasts 30m, and Robert Leitao of Braeburn Group, who suggests 40m by the end of the year. The most pessimistic is Gene Munster, a stock analyst at Piper Jaffray, who reckons 8m.

The lowest of those numbers would dwarf the existing smartwatch market, where the biggest player, Pebble, has shipped just over 1m units in two years, and devices using Google’s “Android Wear” from companies including Samsung, Motorola and LG shipped just 720,000 in 2014. In all, 6.8m smartwatches shipped last year, according to research company Smartwatch Group, at an average price of $189, creating a market worth $1.3bn.

Simple maths suggests Apple will crash through that if it gets anywhere near the middle of analyst estimates of about 22m in the first year. Estimates are that the watch will add about $10bn in revenue, and an unknown amount of profit, during 2015.

Neil Cybart, a former stock analyst at investment bank Keefe, Bruyette & Woods, who has set up his own company, Above Avalon, to analyse Apple, says Huberty is one of the more bullish on it. “[Her] theory about Apple products serving user needs one-third of the day, but that it can increase to 75%, is maybe the most important takeaway from the note and I think it essentially describes Apple’s future,” he says.

Apple has often faced critics, but time and again it has proved them wrong. When Steve Jobs launched the colourful iMac computer designed by Ive in May 1998, Apple was a deadbeat in the PC market, with about 3% sales share. The iMac helped revive it. When Jobs unveiled the iPod in October 2001, the first comment on a gadget site was that it had less storage than existing players, and no Wi-Fi connectivity, making it “lame”. More than 400m have been sold. Microsoft’s Steve Ballmer laughed at the iPhone in January 2007; Apple has trounced Microsoft in the mobile market. Though the iPad has seen sales begin to shrink, Apple is still by far the biggest vendor in that market, and now aims to sell the tablets to businesses through a deal with IBM. And in the final quarter of 2014 its iPhones outsold Samsung’s smartphone range, giving it a new high of 15% of all mobile phone sales.

The real question is whether the watch can become an unstoppable money-maker like the iPhone rather than a shorter-term fizz like the iPad – which nevertheless generated $27.8bn in revenue in 2014.

Ben Thompson, who runs his own Stratechery consultancy, thinks so: “The biggest initial benefit of the watch will be the addition of far more ‘small conveniences’ than most people expect (and, on the flip side, the removal of small annoyances),” he notes. Cybart points out that Apple has long been valued below other competitors based on its profits: it trades on a price-earnings ratio of about 10, compared to 17 for many tech companies. “The overall [stock] market has a market cap of $19tn, so finding $250bn is not an impossible task,” Cybart says. “There is nothing technically stopping it reaching $1tn.”