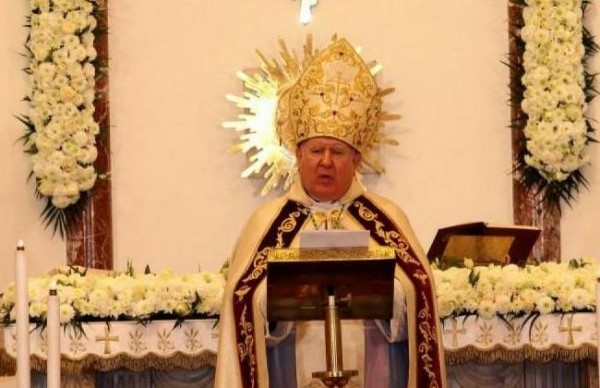 Beirut, Lebanon- Maronite Bishop Boulos Matar denied on Sunday that U.S. Secretary of State John Kerry informed him that Washington is optimistic that a new head of state would be elected within two months after a nuclear deal with the Islamic Republic of Iran is reached.

“Kerry didn’t inform me when I met with him in Paris that a president would be elected within two months,” Matar said in comments to Voice of Lebanon radio (93.3).

He stressed that the meeting was “accidental” and lasted no more than 4 minutes.

This development comes after Al-Mustaqbal newspaper reported earlier that Matar and Kerry held a 45-minute meeting on Saturday in Paris, France.

Sources told the newspaper that Kerry clarified to Matar that “Washington is optimistic that a nuclear deal with Iran could help in resolving the Lebanese presidential crisis within two month.”

Lebanon has been without a head state since May 25 when the term of President Michel Suleiman ended without the election of his successor.

The U.S. secretary of state spent three days in Switzerland earlier this week discussing with Iranian Foreign Minister Mohammad Javad Zarif the Iranian nuclear deal with an aim to finalize it before March 31 deadline

Fears have been raised in Israel and most of the Middle East that the deal could leave much of Iran’s uranium enrichment capability in place — in particular that Tehran would still have thousands of centrifuges which spin uranium gas into high-grade fissile material capable of fueling a nuclear weapon.

A statement released by the Central Maronite Council Sunday confirmed that a meeting took place between Matar and Kerry alongside the president of the CMC, Wadih al-Khazen, in Paris Saturday.

According to the statement, they discussed the Christian presence in Lebanon and the Middle East, and the presidential election, with Kerry urging all sides to elect a president as soon as possible.

The Lebanese parliament failed last February 18 and for the 18th time in a row to elect a president to replace Michel Suleiman.
As in the previous sessions the parliament was unable to reach a quorum because the Iranian backed Hezbollah militant group and its ally MP Michel Aoun’s Change and Reform bloc MPs boycotted the sessions.

Lebanese Forces leader Samir Geagea who was the first to announce his candidacy described last week the presidential vacuum as a “misery,” and blamed Iran , the backer of the Hezbollah-militant group for the deadlock .

“More than any other time Iran does not want a president for Lebanon unless he belonged to its camp,” Geagea told journalists who visited him in Maarab last Tuesday.

“Iran is tampering with the strategic balances of the region and there is no one to stoop it . In addition the Iranian military intelligence in the region has no parallel today. The strategic balance was possible to achieve if the political position of the Americans was different.” Geagea was quoted as saying

“This is a misery and brings sadness,” Geagea added.
The LF chief said that Tehran had called for the mediation of French official Jean-François Girault. But Iranian officials later informed him that Hezbollah will not give up its support to the candidacy of Free Patriotic Movement leader MP Michel Aoun.

Girault, a French presidential envoy, has met with Lebanese officials during recent visits to Beirut.

He has also traveled to Riyadh, Tehran and the Vatican to resolve Lebanon’s presidential crisis