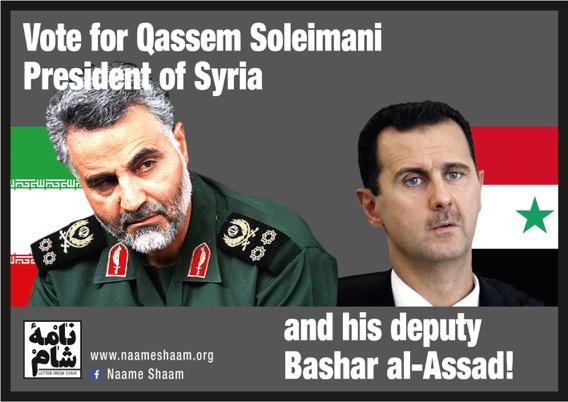 A poster which appeared during the elections in Syria to show that al-Assad himself is a mere puppet of the Iranian regime. According to military experts Qassem Soleimani is the real power behind the Syrian regime and is supervising its army and the Shiite militias including the Iranian backed Lebanese Hezbollah militant group.
Share:

Syria’s envoy to the United Nations says it’s time for the United States and other Western powers to accept that President Bashar al-Assad is here to stay, and to abandon what he suggested was a failed strategy of trying to split the Middle East into sectarian enclaves.

Speaking to Reuters on the eve of the fourth anniversary of the Syrian war, Assad’s long-serving U.N. ambassador Bashar Ja’afari said his president was ready to work with the United States and others to combat terrorism in the Middle East.

“We don’t want any vacuum in the country that would create chaos such as happened inLibya and Iraq and … Afghanistan,” he said. “President Assad can deliver because he is a strong president. He rules over a strong institution, which is the Syrian army. He has resisted pressure for four years.”

“He is the man who can deliver any solution,” he added.

Britain and France have rejected calls to restore ties with the Assad government. U.S. officials say there is no shift in their policy regarding Assad, even as their focus is fighting Islamic State, an al Qaeda offshoot which is also an enemy of Damascus.

Some European Union countries that withdrew their ambassadors from Syria are saying privately it is time for more communication with Damascus, diplomats said in February.

Diplomats say the calls have come from or would be supported by countries including Sweden, Denmark, Romania, Bulgaria, Austria and Spain, as well as the Czech Republic, which did not withdraw its ambassador. Norway and Switzerland, which are outside the EU, are also supportive.

Such countries say that the threat from Islamic State has made Assad the lesser of two evils, seeing a need to re-engage with Damascus as a potential ally against the extremists, according to the diplomats.

U.S. officials at the United Nations did not have an immediate comment on Ja’afari’s latest statements.

They noted recent comments to the Security Council by Washington’s U.N. ambassador Samantha Power rejecting the argument that countries should partner with Damascus to more effectively fight extremists.

The United States and other Western powers have condemned Assad for widespread human rights violations since the uprising against his government began in 2011.

But Ja’afari insisted that keeping Assad, who was re-elected last year in a poll his foes regard as illegitimate, was the only path to peace and unity.

“NOT A SYRIAN CONFLICT”

Ja’afari said that “many European delegations” had visited Damascus to ask for strengthened anti-terrorism cooperation, without specifying which countries.

“We are telling everyone … if you want this cooperation to be fruitful you need to get back to Syria, to reopen your embassies.”

Indicating that Damascus wants Assad restored to international political legitimacy in exchange for security cooperation, Ja’afari said that “the benefit of such cooperation should be mutual … not only unilateral.”

He blasted U.S. President Barack Obama’s strategy of training and arming what he described as “so-called moderate” rebels, saying it had only served to deliver weapons into the hands of Islamic State.

The training of rebels has proven difficult. The Hazzm movement was once central to a covert CIA operation to arm Syrian rebels, but the group’s collapse last week underlined the failure of efforts to unify Arab and Western support for mainstream insurgents.

“This is not a Syrian conflict,” Ja’afari said.

“It is an international terror war waged against the Syrian government and the Syrian people,” he added, referring to the tens of thousands of foreign fighters who have joined Islamic State and other jihadist group in the country.