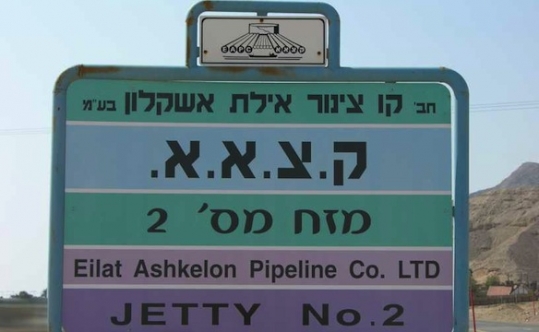 As Israel loudly and publicly denounces Iran and its nuclear program this week, the two countries are quietly tussling in a decades-old dispute over a secretive oil pipeline company that could be worth billions of dollars to Tehran.

In a Swiss court, lawyers for each side are locked in arbitration over the Eilat-Ashkelon Pipeline Co. (EAPC), a joint venture set up in 1968, when the two nations were friendly, to transport Iranian oil to the Mediterranean.

For a decade, the pipeline successfully carried oil from the Red Sea for export to Europe. But since the 1979 revolution that brought the ayatollahs to power, Iran has been demanding its share of revenues and assets that remained in Israel.

Since the partnership collapsed, EAPC has grown into a complex of energy assets, now mostly handling oil from former Soviet states.

No one knows how much profit it has made or how much it is worth, largely because it is protected in a similar way to Israel’s intelligence agencies, including by gag orders restricting coverage of its activities.

But Tehran, setting aside its decades-old refusal to recognize Israel’s right to exist, is determined to recoup its part of EAPC and has been pursuing a complex arbitration case since 1994, first in France and now in Switzerland.

In that time, the company has become the largest distributor of oil in Israel, with ambitions to become a major hub for energy trading in the Mediterranean. Israel maintains tight controls over EAPC, to the extent that articles about it, including this one, must pass through the military censor.

FALL OF THE SHAH

The company has its roots in the 1967 Middle East war, when Egypt blocked the Suez Canal, making it impossible for Iran to transport its oil by tanker to Europe. Under the EAPC deal, Iranian tankers would unload at the Red Sea port of Eilat and oil would flow 254 km (158 miles) northwest to Ashkelon.

The countries formed a straw company in Halifax, Canada called APC Holdings, the primary shareholder in EAPC. By December 1969 the pipeline was ready to handle 60 million tons of crude a year, though it never reached that level.

A decade later Iran’s Shah was ousted and the partners in EAPC became enemies overnight. On Tuesday Israeli Prime Minister Benjamin Netanyahu was to deliver a speech to the U.S. Congress to set out his concerns that Washington is not doing enough to stop Iran acquiring a nuclear bomb – an intention Tehran strenuously denies. [ID:nL1N0W50RR]

Documents of one case in Switzerland show the National Iranian Oil Co. demanding $800 million from Israel. In 2013, after 19 years of arbitration, the Swiss court reached a partial ruling that Israel must cover all the suit’s legal fees, amounting to 450,000 Swiss francs ($468,700). It is not clear whether that money has been paid.

“Since commercial arbitration is privileged … we need to wait until another court relates to this issue to get more information.”

But much greater sums may be involved in the dispute.

London-based Global Arbitration Review, a magazine dedicated to the industry, has reported that Iran’s Geneva-based law firm “persuaded Switzerland’s Federal Supreme Court to allow a $7 billion arbitration claim by the firm’s client … to proceed against Israel.”

It is not clear what the $7 billion covers, and lawyers for both countries declined to comment.

While the proceedings have dragged on, EAPC has expanded.

It added a reverse flow system so oil from the Black or Caspian Seas can be shipped from Eilat to southern Asia and the Far East, and grew its storage capacity for traders in the region. Its pipelines feed refineries and it has the biggest stake in Israel’s largest private power plant.

With the company’s 49-year concession to operate the pipeline up for renewal in 2017, there is growing pressure to remove much of its secrecy, especially after the pipe burst in December, spilling millions of liters of oil into a desert nature reserve in Israel’s worst spill.

Some legislators want to change the law protecting EAPC.

“Part of the data may indeed hurt Israel’s interests,” said Micky Rosenthal, a member of parliament’s oversight committee, saying not everything may need to be disclosed.

“But most of the data – what is the CEO’s salary, how many people work there, what are the amounts of oil flowing, the financial turnover, how much Israel profited or lost … there is nothing to prevent them from being made public.”