Netanyahu’s speech may be more about his career than Iran, analysis 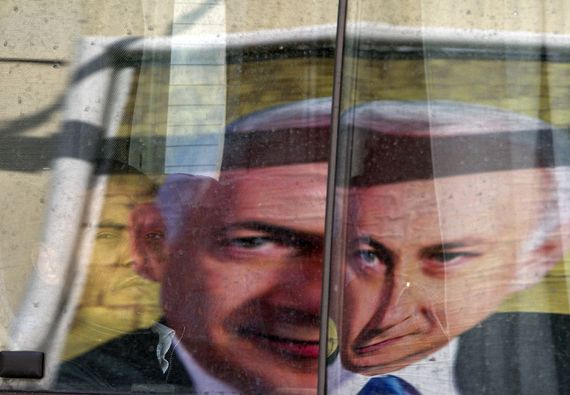 By: JEFFREY GOLDBERG
It would be reassuring—sort of—to believe that Benjamin Netanyahu decided to set the U.S.-Israel relationship on fire mainly because he fears that President Obama is selling out Israel. But Netanyahu’s speech to Congress on March 3—a speech arranged without Obama’s knowledge by Israeli Ambassador Ron Dermer and by Obama’s chief Republican rival, House Speaker John Boehner—is motivated by another powerful fear: the fear of unemployment. The message Bibi is preparing to deliver on Tuesday (a “statesmanlike message,” according to an official close to him) has as its actual target not Congress but, instead, Israeli voters who need reminding, in Netanyahu’s view, that he is the only leader strong enough to face down both the genocidal regime in Tehran and the Israel-loathing regime in Washington. (Make no mistake: Netanyahu sees Obama as an actual adversary. If only all of Israel’s adversaries would veto U.N. Security Council resolutions hostile to Israel…)

Bibi is facing an existential threat to his career, and Boehner is staging for him the ultimate campaign rally, 6,000 miles away from home. People I’ve spoken with in Israel who have a sophisticated understanding of current campaign dynamics—the Israeli election is set for March 17—say that a well-delivered, well-received speech (standing ovations in Congress seem very impressive unless you know better) could gain Netanyahu two or three extra seats in the Knesset, which might be what he needs to retain his job. Polls are showing the centrist Zionist Camp party led by Isaac Herzog and Tzipi Livni competing strongly against Netanyahu’s Likud party, and there are also hints that traditional Netanyahu voters who have grown tired of him or who are concerned about issues that don’t seem to concern him—Israel’s affordable housing crisis, for one—might move to other right-wing parties, making his task more difficult.

All of this is not to say that Netanyahu isn’t worried about Iran, and isn’t worried about a set of (for now, theoretical) concessions by the West that could put Iran on a slow but steady path to the nuclear threshold. But there is no reason—none, zero, efes—to believe that his putative goal, to stiffen the spine of Congress in advance of a framework agreement, could not have been achieved a) immediately after the election; b) in intensive one-on-one, or one-on-two, or five, lobbying meetings with senators; or c) in a way that didn’t so obviously disrespect the president of the United States, or place Democratic supporters of Israel in an atrocious bind. “If this didn’t have an electoral quality to it, why not just say to Boehner, ‘Invite me after the election’?” Dennis Ross, the former Middle East peace negotiator, asked me.

Netanyahu is engaging in behavior that is without precedent: He is apparently so desperate to stay in office that he has let the Republicans weaponize his country in their struggle against a Democratic president they despise. Boehner seeks to do damage to Obama, and he has turned Netanyahu into an ally in this cause. It’s not entirely clear here who is being played.

For decades, it has been a cardinal principle of Israeli security and foreign-policy doctrine that its leaders must cultivate bipartisan support in the United States, and therefore avoid even the appearance of favoritism. This is the official position of the leading pro-Israel lobbying group in Washington, AIPAC, as well, which is why its leaders are privately fuming about Netanyahu’s end-run around the White House. Even though AIPAC’s leadership leans right, the organization knows that support for Israel in America must be bipartisan in order for it to be stable. “Dermer and Netanyahu don’t believe that Democrats are capable of being pro-Israel, which is crazy for a lot of reasons, but one of the main reasons is that most Jews are Democrats,” one veteran AIPAC leader told me.

In Israel, cynicism about Netanyahu’s intentions is spreading. “Netanyahu, who purports to be the big expert on everything American, subordinated Israel’s most crucial strategic interests to election considerations, and the repercussions will endure for some time,” Chuck Freilich, a former deputy head of Israel’s National Security Council, wrote last week. Another Netanyahu critic, Martin Indyk, the former Obama administration peace envoy, told me that he believes the Israeli prime minister is motivated by a combination of factors, including a belief that he is best equipped to defend the Jewish people against eliminationist threats, and a “genuine concern about the nature of the deal,” which Indyk said he shares.

Indyk went on to say, however, that “in the process, Bibi has generated a suspicion that there’s another motivation, which is that he’s in a neck-and-neck race for prime minister, and this appearance before Congress looks like an attempt to show the Israeli voter two weeks before the election that Congress has his back even though he’s in a confrontation with the president of the United States. And because of that suspicion, he has managed to achieve the opposite of his intention.”

People with knowledge of Netanyahu’s thinking say he believes he will be able, after the election (and assuming he forms the next government), to cauterize the wounds he has opened with the Obama administration. But as Michael Oren, who served as Israel’s ambassador to the United States until 2013, has noted, the U.S.-Israel relationship is now in “uncharted waters.” No one knows how this disaster will unfold.

Make no mistake: Netanyahu sees Obama as an actual adversary.
Ross, the former negotiator, believes that the near-term relationship between the United States and Israel depends almost entirely on the nature of the next Israeli government. “If we see a solely right-wing government, then we have a situation in which even if Bibi seeks to improve things, it will be difficult,” he said. “On traditional defense issues, the relations will be okay, but the impulse won’t be there on the part of the Obama administration to protect Israel on matters related to the delegitimization campaign”—the movement that calls into question Israel’s right to exist—“and on the internationalization of the conflict.” In other words, do not expect to see the Obama administration go out of its way to protect Israel at the United Nations.

Despite the invitation from Boehner, it has become clear that much of the rest of the world has stopped listening to Netanyahu. This is not solely his fault—the world is stacked against Israel on most matters—but it is Netanyahu’s job to work within this straitened reality.

“Because Netanyahu was not forthcoming on the Palestinian issue and because he eroded Israel’s international legitimacy, the world is no longer listening to his truthful message on the Iranian issue,” Ari Shavit, the Israeli columnist, wrote this week. “Because Netanyahu has worked against rather than with the American administration, the American administration has tilted toward Tehran and against Jerusalem. Israel, rather than Iran, has been isolated. The reason Netanyahu is about to give a brilliant and desperate speech to the U.S. Congress is that he knows he lost the game.”

On this last point, I am not entirely sure: One of the reasons Obama administration officials have reacted with such pique to the Netanyahu speech is that they know he is an effective speaker, and they understand that they may, in any case, have a hard time selling a nuclear deal to Congress, and to an American public, predisposed to dislike and distrust Iran.

But let’s look at what would happen if Netanyahu “wins” this battle. Indyk lays out a depressing scenario:

“What happens if the president succeeds in doing a deal despite the speech of the prime minister?” he asks. “Instead of the United States and Israel talking about ways to provide strategic reassurance to Israel, there’s going to be an ongoing fight over this deal. And what if the prime minister then succeeds in killing the deal? How will the president relate to the destruction of one of his signature policy initiatives? And if the sanctions then collapse, as seems likely, and Iran continues moving towards a nuclear weapon, how does the prime minister propose to stop Iran? He will certainly manage in the process to create the impression that he wants the United States to go to war with Iran. I don’t think the American people, in their war-weary state, will appreciate that.”