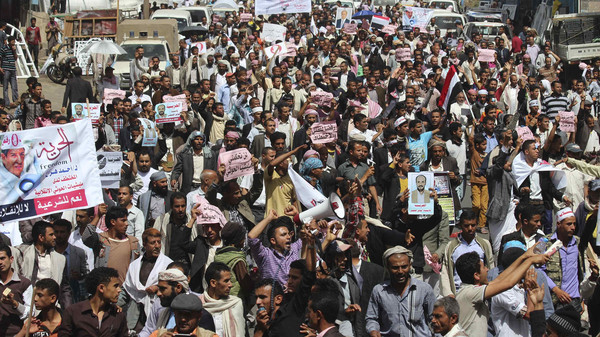 Anti-Houthi protesters march during a demonstration to show support to Yemen’s President Abd-Rabbu Mansour Hadi in the central city of Ibb February 28, 2015. Yemen’s capital Sanaa was captured in September by the Shi’ite Muslim Houthi militia, which placed Hadi under house arrest and forced him to announce his resignation. Arab and Western states this month evacuated their Sanaa embassies. Parliament never approved the resignation, and on Sunday Hadi fled to Aden where he has set up a new seat of power. REUTERS/Mohammed al-Moailme (YEMEN – Tags: CIVIL UNREST POLITICS)
Share:

What has happened in Sanaa is a coup, the president, who now operates in the southern city of Aden, said. Hadi arrived in Aden earlier this week after fleeting the Houthi-run capital where he was put under house arrest by the Shiite militants.

In related news, the first Iranian flight landed in Sanaa, a day after officials from the militia-controlled city signed an aviation agreement with Tehran, Agence France-Presse reported.

The Mahan Air plane arrived in Sanaa carrying a team from the Iranian Red Crescent and medical aid, an aviation official told AFP.

Senior Iranian diplomats were on hand to welcome the flight — the first between the two countries in many years.

Yemen’s official Saba news agency, which is controlled by the Shiite militiamen who overran Sanaa in September, said that under the deal Iran Mahan Air and Yemenia would operate 14 flights each a week.

Saudi Arabia, the UAE and Kuwait have relocate their diplomatic missions to the southern Yemeni city of Aden.

Western-backed Hadi, who rescinded a resignation he offered last month and has declared all actions by the Houthis to be illegitimate.

Aden was the capital of an independent south Yemen before the two Yemens were united in 1990.