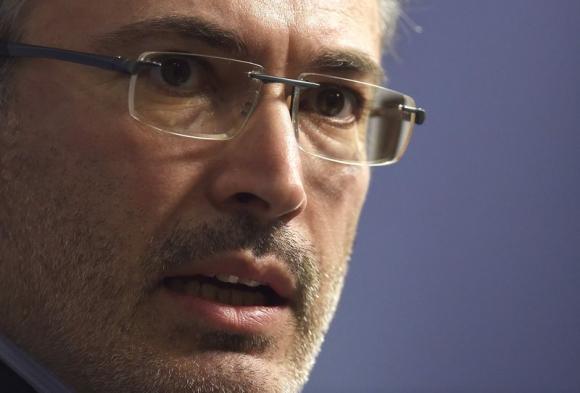 “Putin with bare chest isn’t a mighty leader: He is a naked king,” Khodorkovsky, once Russia’s richest man who was arrested in 2003 after falling foul of Putin only to be released in 2013, told an audience in London.

Khodorkovsky, who once controlled Russia’s biggest oil company, YUKOS, said the Russianeconomy would weaken further and that eventually its weakness would provoke a battle between the powerful clans which dominate Russia.

In a message which is likely to anger the 62-year-old Kremlin chief, the former tycoon also called on the West to build ties with opposition groups in expectation of an end to the Putin era.

“Tomorrow when the regime changes you will have to build a relationship and you will have very little time,” Khodorkovsky, 51, told an event organized by Chatham House policy thinktank.

Khodorkovsky, who once controlled YUKOS, was convicted of tax evasion and fraud in a Moscow trial which he said was motivated by enemies who wanted to rip apart his company and punish him for his political ambitions.

He always denied the charges. YUKOS was crippled with massive back-tax claims and then its main Siberian oil production units were sold off by the state, only to be bought later by state-controlled companies.

Khodorkovsky was pardoned by Putin in 2013 and left Russia.

He said Putin was in the twilight of his power but the finale of his presidency, which began in 1999, could last long and be painful and dangerous for both the West and Russia.

“Russia will have to stand long in agony by the bed of the sick emperor. It will be painful for the population and dangerous for the West,” said Khodorkovsky.

He said he believed the conflict in Ukraine would escalate further as Putin’s ultimate goal were much more broad.

“Putin doesn’t need Donbass (east Ukraine). He wants to determine the fate of the world at talks with a U.S. President,” Khodorkovsky said.

“Putin is dreaming of getting a deal with the United States about a new-old order for the world, when the world is split on zone of influence. When you cannot interfere in someone else’s zone. Not even to mention internal politics,” he said.

A chemical engineer who served in the Communist Youth League, Khodorkovsky started to trade goods as the Soviet Union crumbled.

He soon began buying up state assets, gaining control of some of Russia’s best oil fields and even pushing legislation he favored through parliament despite opposition of the Kremlin and government.

On Thursday, the former billionaire declined to disclose his wealth when asked how much money he could invest in the currently very fragmented Russian opposition.

He said he was not looking for any state jobs should power change in Russia but he wanted to make sure the opposition changed the country so it had free elections and economy.

“It doesn’t matter if it take place tomorrow or in 10 years. Although we all hope to be still alive when it happens.”