Fears grow that more Christians were abducted by ISIS 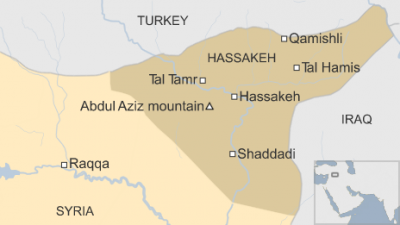 There are fears that more members of an Assyrian Christian community in north-eastern Syria were abducted by Islamic State militants than at first thought.

Sources in the community said as many as 200 people might have been seized on Monday in raids on a string of villages near Tal Tamr, in Hassakeh province.

Most of the captives were women, children and the elderly.

Some 1,000 local Assyrian families are believed to have fled their homes in the wake of the abductions.

Kurdish and Christian militia are battling IS in the area.

Kurdish offensive
At least 90 Assyrians were seized by the militants on Monday as they captured 12 villages along the southern bank of the Khabur river before dawn, according to the Syrian Observatory for Human Rights, a UK-based opposition group that monitors the conflict in the country.

The Syriac National Council of Syria put the figure as high as 150, while Afram Yaboub of the Assyrian Federation of Sweden said sources on the ground had told him that at least 60 and up to 200 people were missing.

However, a spokesman for the Syriac Military Council, a Christian militia fighting alongside the Kurdish Popular Protection Units (YPG), told the BBC that between 350 and 400 civilians had been taken, and that some had already been killed.

Kino Gabriel said that the Syriac Military Council believed the captives had been taken to Abdul Aziz mountain but it was not sure about their exact location.

The BBC’s Jonny Dymond in Beirut says the motive for the seizure of so many Assyrians is not yet clear. Our correspondent says it may be that the Assyrian prisoners are to be used as part of a swap with the Kurdish forces.

Osama Edward of the Sweden-based Assyrian Human Rights Network told the AFP news agency that the captives had been taken to the IS stronghold of Shaddadi, as did Syria’s state news agency, Sana.

“People were expecting an attack, but they thought that either the Syrian army, which is just 30km [20 miles] from there or the Kurds or the [US-led] coalition’s strikes would protect them,” Mr Edward said.

Hundreds of Assyrians who were living in villages on the north bank of the Khabur river and elsewhere are reported to have fled following the attack to the largely Kurdish-controlled provincial capital of Hassakeh, to the south-east, and Qamishli, another city to the north-east.

“Since Monday, 800 families have taken refuge in the city of Hassakeh and another 150 in Qamishli,” Mr Edward reported.

Mr Gabriel said IS had moved a big force into the area and were trying to take control of Tal Tamr.

The Syriac Military Council had about 400 fighters in the area and at least four had been killed in clashes with the jihadists, he added. The YPG has deployed between 1,000 and 1,500 fighters.

The YPG was also reported to be continuing a major offensive launched on Sunday against IS some 100km (60 miles) to the east, near the border with Iraq – an area of vital importance to the jihadists.

The Syrian Observatory said at least 132 IS militants had been killed in the offensive, along with seven members of the YPG.

A Kurdish official told Reuters news agency the YPG had cut a main road linking Tal Hamis, an IS stronghold, with al-Houl, a town just a few kilometres from the Iraqi border.