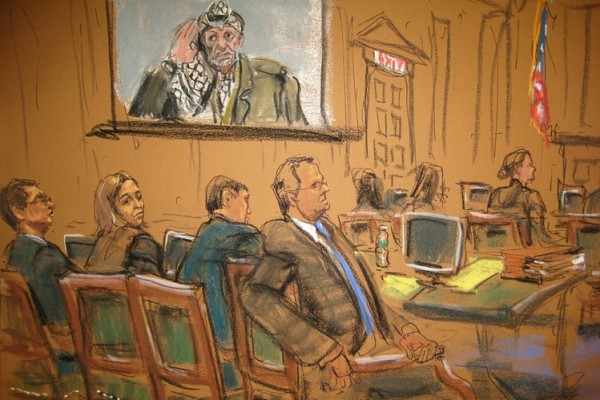 The late Palestinian leader Yasser Arafat is projected to a screen during the plaintiff’s opening statements in a court sketch from January 13. PHOTO: REUTERS
Share:
A U.S. jury on Monday found the Palestine Liberation Organization and the Palestinian Authority liable for supporting terrorist attacks in Israel more than a decade ago that killed dozens of Americans.

Jurors in Manhattan federal court awarded $218.5 million in damages to 10 American families who brought the case, a sum that is automatically tripled to $655.5 million under a 1992 U.S. anti-terrorism law, lawyers for the families said.

Both defendants said they would appeal. It is unclear whether the plaintiffs can ever collect, though their lawyers vowed to seek out Palestinian assets to satisfy the judgment.

The verdict was the second in less than a year in which a U.S. jury found defendants liable under the Anti-Terrorism Act, which lets U.S. citizens injured by acts of international terrorism pursue damages in federal court.

Last September, a federal jury in Brooklyn found Arab Bank Plc liable for providing material support to Hamas. A separate trial to determine damages is scheduled for this year.

The verdicts could bolster efforts by American victims to hold foreign entities responsible in U.S. courts for overseas attacks.

A 12-member jury on Monday found the PLO and the Palestinian Authority liable over six shootings and bombings between 2002 and 2004 in the Jerusalem area and which have been attributed to the al-Aqsa Martyrs Brigades and Hamas. The attacks killed 33 people and injured more than 450.

“Now the PLO and the PA know there is a price for supporting terrorism,” said Nitsana Darshan-Leitner, a lawyer for the plaintiffs.

The PLO and the Palestinian Authority have faced similar lawsuits in the past but this was by far the largest judgment entered against the defendants.

Palestinian Prime Minister Rami Hamdallah’s office issued a statement saying both defendants would appeal and calling the allegations in the case “baseless.”

He also cited a decision this month from U.S. District Judge Colleen Kollar-Kotelly in Washington, D.C., who ruled she did not have jurisdiction over two similar Anti-Terrorism Act cases against the Palestinian Authority.

In a statement, Israeli Foreign Minister Avigdor Lieberman called the verdict a “moral victory for the state of Israel and victims of terrorism.”

The plaintiffs had requested more than $350 million of damages, or more than $1 billion after tripling.

They claimed late PLO Chairman Yasser Arafat and his agents routinely arranged for attackers to be paid, kept them on Palestinian payrolls and made payments to families of attackers who died.

Lawyers for the PLO and the Palestinian Authority said those entities condemned the attacks, and blamed them on rogue low-level employees.

The verdict added a new dimension to the long-running Middle East conflict.

Palestinians wish to form a state in Gaza, the West Bank and East Jerusalem, lands Israelcaptured in the 1967 Arab-Israeli war.

Palestine has since 2012 been a United Nations “observer state” and Palestinians are expected soon to join the International Criminal Court, which launched an inquiry that could lead to war crime charges against Israel.