Rev. Graham: “Who do you want to follow, the dead or the living?” 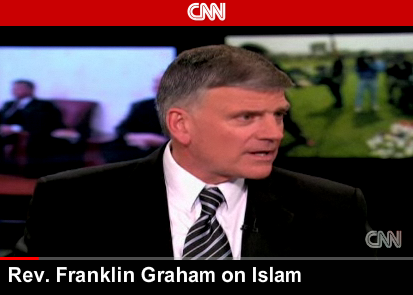 Reverend Franklin Graham, who has often criticized the Quran and radical Islam, stating that Islam itself is a “religion of war,” said this week that Mohammed, who Muslims revere as God’s final prophet to mankind, was “dead and buried” but that Jesus Christ is alive, and asked, “Who do you want to follow, the dead or the living?”

“Jesus Christ is alive and He is sitting at the right hand of God the Father in Heaven,” he said. “Who do you want to follow, the dead or the living?”

Earlier this month, after President Barack Obama at the National Prayer Breakfast equated the barbarism of the Islamic State with actions taken during the Crusades of the 11th century, Rev. Graham remarked that while some Christians did bad things in the name of Jesus Christ, He Himself never killed anyone.

“Mohammed, on the contrary, was a warrior and killed many innocent people,” said Rev. Graham, adding that, “True followers of Christ emulate Christ – true followers of Mohammed emulate Mohammed.”

21 Egyptian Christians moments before they were beheaded with knives by members of the Islamic State. (Photo: IS video)

In a December interview with Christian Today, Rev. Graham, who is the son of world-renowned pastor Billy Graham, said that Islam has not changed in 1,500 years, “It is the same. It is a religion of war.”

Look at the Islamic State, the Taliban, or Boko Haram, he said, “This is Islam. It has not been hijacked by radicals. This is the faith, this is the religion. It is what it is. It speaks for itself.”

In a Feb. 17 interview with Fox’s On the Record With Greta Van Susteren, Franklin Graham also discussed how Islamic State members who were committing atrocities – beheadings, crucifixions, burning people alive, stoning – think “they are pleasing God because the Quran teaches this.”

That religious aspect of Islamic State and similar radical groups is a fact the Obama administration does not want to accept and refuses to believe it, said the reverend.

In his interview, Rev. Graham also told host Greta Van Susteren, “I want them [Islamic State] to know that what they did was evil, it was wrong, it was a sin against God. And I know they did this [beheading of Coptic Christians] thinking they were pleasing God. But it doesn’t, it’s a sin, and God loves you and God is willing to forgive you but you’ve got to be willing to confess your sin to Him and ask for His forgiveness.”

“I think it’s important that the Muslim world know that God does love them and He’s made a way for them to be with Him in Heaven, and that’s through faith in his Son Jesus Christ,” said the reverend.

Franklin Graham, 62, is the president of the Billy Graham Evangelistic Association, and also runs the international relief group Samaritan’s Purse.