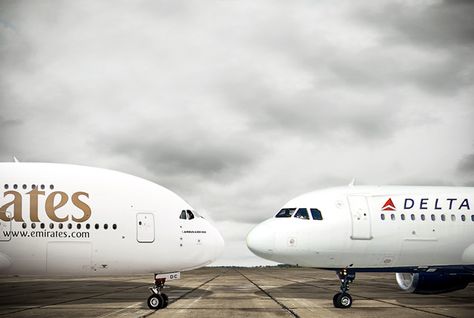 An increasingly bitter trade row between U.S. and Gulf airlines deepened on Thursday when Dubai’s Emirates rejected a Delta Air Lines apology for remarks perceived as linking Gulf carriers with the Sept. 11 attacks on the United States in 2001.

Relations have deteriorated since a group of U.S. airlines compiled a dossier claiming that major Gulf carriers had received $40 billion in subsidies and urged the U.S. government to renegotiate or scrap an Open Skies trade pact.

Gulf carriers denied that they received subsidies and said that United States-based airlines themselves benefited from $5 billion in government help in the aftermath of the 9/11 attacks.

The comments have infuriated officials in the UAE and Qatar, two U.S. allies that offered military or logistical support for international operations after the 2001 attacks.

Delta said that Anderson had been responding to claims that the post-9/11 payments to U.S. airlines amounted to subsidies.

“He didn’t mean to suggest the Gulf carriers or their governments are linked to the 9/11 terrorists. We apologize if anyone was offended,” it said in an emailed statement.

But Emirates, the largest of the three leading Gulf carriers that also include Qatar Airways and Abu Dhabi’s Etihad, rebuffed the explanation.

“We believe that the statements made this week by Mr. Anderson were deliberately crafted and delivered for specific effect,” it said in a statement.

In the dossier, details of which have been seen by Reuters, U.S. airlines said they have lost significant bookings since 2008 because of Gulf competition and cited documents that they say demonstrate aid including cheap airport fees.

Gulf officials say the U.S. carriers do not serve the same routes and are losing traffic because of poorer service. They also say that airport charges are the same for foreign carriers.

The row echoes recent friction between Gulf airlines and European carriers such as Lufthansa and comes as some U.S. airlines are also campaigning to close the U.S. ExIm bank, an export credit agency that they say benefits Gulf rivals.

Western airlines have said that thousands of service industry jobs are under threat, but Gulf carriers have responded by saying that they support at least as many jobs in the aerospace sector through huge aircraft orders.

The challenge to European carriers from growing competition, coupled with economic weakness at home, was highlighted on Thursday when Air France-KLM declined to give a profit forecast for 2015, sending its shares down 5 percent.